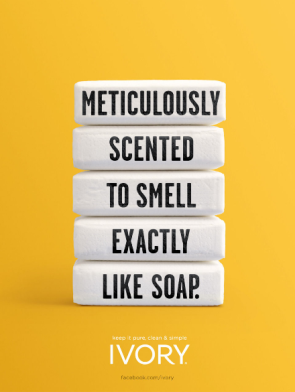 The older I get, the more I purposely seek out simple products. One example is the traditional 2 oz. Old Spice Classic Original Scent deodorant. Another is Ivory soap.

Above is one of the newer ad campaigns for the soap, and I seriously dig how they shove the old-school formula right in your face because it works so well. To me it says, "This is soap. Soap is supposed to be simple, cheap and clean you up so you can get on with life." Big kudos to the Proctor & Gamble advertising team for Ivory, because oh yeah, they nailed it. It's perfect.

Ivory is one of those soaps that has been around forever (since 1879), and the only difference between then and now is that Ivory doesn't float as good as it used to. The reason for this is because of the addition of glycerin, added in so the soap doesn't dry skin as quickly. It works well, but a bar of Ivory won't come rushing to the top anymore if you drop it in a tub or sink full of water. One of Ivory's ad slogans for the longest time was "It floats!" Well, there's no more mention of "float" anywhere on Ivory soap packaging, but that's okay because the soap still works great.

I can guarantee you at some point in your life you have used Ivory. When I recently rediscovered the brand, I recognized the scent the moment I started using it, and all of a sudden I was a little kid again. The scent is that familiar to me. On top of that the feeling of using Ivory is exactly the same as I remember, where your skin literally feels squeaky clean after using it.

Why did I start using Ivory? Because it's one of the few bar soaps that's perfectly safe for cleaning both the body and face. Believe me, there's a reason when a package of soap lists itself as "hand soap". What that means is that you're not supposed to use it on your face, and if you do, your face will feel awful in one way or another. You'll either feel like your face is burning up for a few minutes, or the skin feels "stretchy" or something else along those lines. Ivory doesn't do any of that. Wash anywhere with it on the body or face, and after you're done you feel exactly how you're supposed to feel - clean.

I've actually read some internet discussion on how some people actually complain that Ivory feels "waxy" or - get this - "smells too soapy". Seriously. And of course the reply by people who know better is always the same: "You obviously don't know what true soap is supposed to feel or smell like."

I for one hope Ivory never strays away from the formula they use, because it's perfect just the way it is. It's a well-known fact that soaps with tons of scent put into it is bad for the face because of the chemicals involved. It's also true that Ivory is one of the very few soaps you can buy with a clear conscience. You don't have to read the label to know what's in it, because you already know. It's just soap that cleans anywhere you wash, doesn't mess up your skin and works exactly like it's supposed to.