Fair warning to anyone who reads this blog, I'm probably going to write a crapload about tech-geeky Mac stuff in my next few posts as I'm figuring all this stuff out. But who knows, maybe some of you out there can benefit from my experiences.

First of all, I bought today what is probably the most expensive cable I've ever purcahsed, a six foot long FireWire (the IEEE 1394 kind) cable. Ready for this? Thirty-six bucks! And no, I'm not kidding. The reason I bought it is so I could transfer video from my new camcorder to the Mac and I needed this stupid cable. Thank you, Radio Shack, for overpricing your wares as usual (because of course Wal-Mart didn't have it).

Before I trekked out for my cable, I was successfully able to transfer all my old (as in over ten years old) VHS footage from the VCR to the camcorder on miniDV. Worked like a charm.

Later on I hooked up the FireWire to the camcorder and the Mac. I haven't used Final Cut Express yet, so I decided to try the built-in iMovie HD that comes with it. I was expecting (truly) to have a ton of problems making the video go from the camcorder to the Mac, but guess what.. it worked first try. I put together some clips and was done in record time. This is way too easy...

Biggest "challenge" if you can call it that, "talking" to my Windows server, which is nothing more than a box with WinXP on it shared out on a workgroup. Here's how that fared out:

Connecting to the XP box wasn't too bad. After reading some help on a Mac site (the Mac help was worthless), I clicked Go then Connect to Server, then typed in smb://ip_of_box and it popped right up - but there was a problem - DOG SLOW TRANSFERS. I mean, we're talkin' real slow.. but I can at least talk to it.

I have VNC server installed on the XP box and have the ability to get to the machine via a web browser java client, but I wanted to know if there was a Mac version of Remote Desktop Connection. Turns out there is. So I tried it. It worked.

The best part is that you can share files between the Mac and XP using this, but it's a bit weird how you do it. I enabled the option in RDC to share out local files. Then while connected to the XP box, I copy/paste files from there to the Mac, not the other way 'round.. and the speed seems more stable and faster. Don't ask me why, I have no idea.

Here's a screen shot of what that looks like: 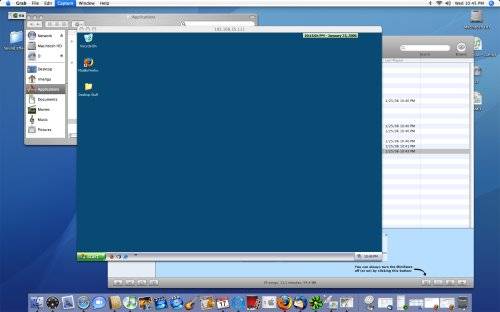 More updates and whatnot as I encounter them...