Is there such a thing as "The Squier Sound?" 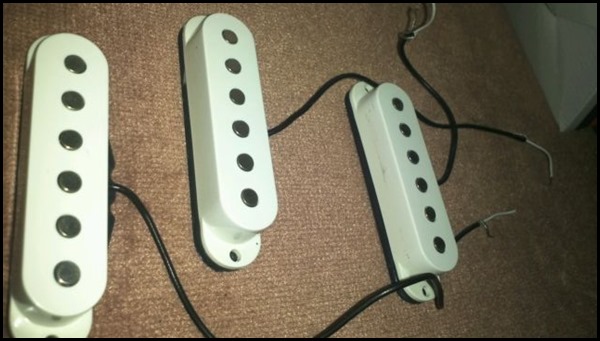 A really interesting phenomenon happens with guys and girls who buy Squier guitars.

It's most likely true your first Stratocaster or Telecaster was in fact a Squier brand guitar. Later on as you got a little better with the instrument, you said to yourself, "Okay, it's time to upgrade; I'm going to buy a real Fender guitar..."

...and that's exactly what you do. You save up your money and then the day finally comes when you buy your first Fender. Whether it's a China-made Modern Player, Mexican-made Standard or the expensive American-made Standard, you're just happy to finally have a "real" Strat or Tele that says "Fender" on the headstock.

At first, you're a really happy player because you "finally got that Fender." It probably took months to save up enough to get that guitar, and yeah, you got it.

Then you notice after playing it for a few weeks that the pickups sound "screechy," as in a really high treble response that you're just not used to. You tell yourself, "Well, that's probably just because I have to get used to the way this guitar sounds, and after a while the pickups will 'break in' and not screech so much..."

...except that screech never goes away. You've tried everything to fix that screech but nothing has worked. Turning the tone knob down on the guitar is annoying, turning treble levels down on pedals and your amp just makes everything "sound like mud," and you quickly discover you'll probably have to buy a new pedal just for that Fender to keep the screech down.

Then you look at that Squier you've got in the corner. By now it's got a little layer of dust on it. You put the Fender in its case or gig bag (because you always keep it oh-so clean because it's so pretty,) pick up the Squier, plug in, strum some chords, and oh-my-God it actually sounds right.

Now you're confused, and probably a little ticked off. Why in the hell does the Squier sound better than that brand-spanking-new Fender you just bought? Also, why does it play better too? Why does the fingerboard feel better to play on? And why does the body feel more comfortable? What's the deal with that?

All good questions, and I'll give you good answers.

A lot of people don't realize that while Squiers may look almost identical to Fenders, the way they're made are totally different and have a personality all their own.

Players who go from Squier to Fender immediately notice that the Fender's pickups to their ears are "too bright." Why? Because they're wound differently. The coil wrap pattern used on Fender pickups produces a sound that's notably brighter (meaning more treble,) which to Squier players sounds "screechy."

Cheap China-made Squier pickups have a "lower ceiling" on the treble side of things. I'm not talking about the Duncan-designed pickups, but rather the absolute dirt cheap pickups that come in certain Squier guitars like the Squier Bullet Strat. Those pickups assumedly have less coils and are most likely manufactured with even-winding instead of a scatter-wound pattern that results in less brightness.

It's probably also true those cheap-ass Squier pickups have magnets that have significantly less pull when compared to Fender pickups.

As crazy as it may be, there are some who actually prefer the tone of the cheap China-made pickups specifically because they're not super-bright like Fender pickups are.

Fender and Squier guitars for the most part have the same "C" shape profile on the back and a 9.5-inch radius on the fingerboard - BUT - the Squier neck is thinner in construction.

Some who switch from Squier to Fender simply never get used to the Fender neck thickness, and more often than not simply describe the neck as "just not feeling right" no matter what adjustments are done to it - even if you have a luthier set up the guitar by hand. A luthier can't do anything concerning thickness of the neck unless you specifically instructed him to shave down the back of it (which is not recommended at all because it can easily ruin a neck since there's no turning back once you do it.)

Most Squier guitars - at least on the Stratocaster side of things - have what's known as a slim body profile. And yes, this literally means the body on the Squier is thinner than a Fender Strat would be.

The thickness of body profile is noticeable whether playing the guitar sitting or standing, as it directly affects how far your picking hand is away from the body when playing. Granted, it's a small difference, but the point is that you'll notice it.

For example, if you switch from a Squier to a Fender, and when playing the Fender you find yourself whacking the strings "in weird places," that's the body thickness difference kicking in. Your brain is trained to play Squier slim body profiles and not standard-thickness Fender body profiles.

The thicker body profile of the Fender is something you'll either eventually get used to, or never get used to.

On my Fender I purposely switched out the bent steel saddles to block saddles to get extra height adjustment.

My Squier Bullet has medium jumbo frets on it, meaning the fret wire is slightly smaller.

In plain English: The height of jumbo frets is 9 hundredths of an inch higher than medium jumbo is.

"9 hundredths of an inch actually matters?"

It is totally true you "fret out" a lot less with larger fret wire, but if you're used to medium jumbo and then switch to jumbo, you have to set up your guitar totally different.

What the Squier player quickly discovers by switching over to a Fender with jumbo frets on it is that he cannot use the same string heights he did with the Squier because buzzing happens all over the place. Instead, he has to raise the strings higher - BUT - then he runs into the problem that the bent steel saddles don't offer enough height adjustment.

Now you know why I switched out to block saddles on my Fender. 🙂

Do all Fender Strats have jumbo frets?

No. Most have medium jumbo, such as the Standard and American Standard.

Fender American Special Stratocaster has jumbo 6150 fret wire on it.

If you want a Fender that at least feels mostly like your Squier, at least on the fingerboard, match the fret wire size to what you have now (it's most likely medium jumbo.)

Squier guitars by default have very basic electronics in them; very rarely will you find any Squier model with any special circuits.

Fender guitars on the other hand do have special circuits in them, which when used in combination with the brighter pickups can result in a sound that Squier players don't like. At all.

The American Special has Texas Special pickups in it mated to what Fender calls a "Greasebucket Tone Circuit," which is a circuit that is described as being able to decrease treble without adding bass. In plain English, that should mean, "won't mud out when you roll down the tone control."

Sounds good, right? Well, it may not be what a Squier player likes at all for tone control sound.

The way Squier axes do tone control is that when you roll the tone down, it basically acts like an envelope filter. For example, if you use the bridge+middle pickup position, bang the strings and roll the tone knob back and forth, the sound that happens is "weeeoww weeeoww weeoww".

A Squier's quirky tone control character is part of what makes the guitar sound like what it does.

In addition, this means any tone setting that works perfect on your Squier won't work at all on a Fender with any special tone circuitry in it. If you have a specific sound you like that you get with your distortion pedal on and the tone rolled down to 3 on your Squier, you will absolutely not be able to get that same sound on the Fender using the same settings. Instead, you'll get a sound that's very different to your ears. And you may not like it.

Yes, there is such a thing as "The Squier Sound"

A lot of you out there are probably really happy to find out The Squier Sound actually exists and know why it exists...

If you're a Squier player and prefer the Squier both for playing and for sound over Fender guitars, now you know why you do.

The only way to get The Squier Sound is to use nothing but original Squier hardware.

Just about all aftermarket Strat and Tele pickups are specifically designed to sound like Fender pickups, which may be exactly what you don't want because of the super-bright "screechy" nature of them.

Yes, this literally means if you want a Squier sound, you purposely have to either buy a stock Squier guitar outright just to get those cheap Chinese pickups that have the "rat tone" you love so much. Why? Because everyone else is selling Fender-like sounding pickups.

Yes, I do describe a Squier's pickup sound as "rat tone"

"Rat tone" is a term I personally use to describe a Squier's pickup sound because it most accurately fits the tone character. Squier pickups sound "ratty" because they have an earlier treble cutoff compared to Fender pickups, "wow" when you roll volume or tone controls when stock Squier electronics are used and "blare" a bit when you add in distortion or overdrive - all of which is cool.

Squier rat tone isn't for everyone, but if you've got a Squier now and just love-love-love that ratty pickup sound, keep it exactly the way it is, because "upgrading" to pickups with Fender-like tone character may be something you won't like at all.