microleague wresting and the wwf

In my last bloggo I made quick mention of a wrestling game that I really liked when I was a kid, but then one of the floppy disks for it botched and I couldn't play it anymore.

Once I started thinking about this, I then thought, "Wait a minute. I should easily be able to find out what the title of this game was called and also be able to play it again within minutes."

The game was called MicroLeague Wrestling. Once I had the name it was easy to find a ROM image of it online, and also grab a Commodore 64 emulator to play it with. I captured a video of me playing the game, seen above.

MLW was released on four platforms. Commodore 64, Amiga, Atari ST and MS-DOS. I also grabbed ROMs for the other systems because I knew the C64 version was the worst-looking and wanted to see the game at its best.

Which of the four is the best? The Atari ST version, no question. While the Amiga version may look better, the gameplay and sound effects are awful compared to the ST. Commodore 64 comes in a close second.

This was pretty awesome for a 1987 release 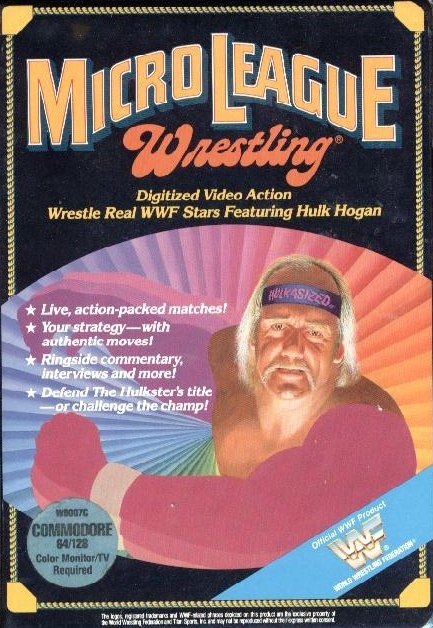 By now you've probably played the video above and thought, "Looks like nothing more than a barely-animated slideshow", and you'd be right - but it didn't matter because there was nothing of its kind before.

MLW was in fact the first officially licensed World Wrestling Federation video game. You can see this on the bottom right corner of the game box cover at right where it states Official WWF Product. This was the real deal.

You also have to remember that this is 1987 we're talking about. To put this in perspective, the Nintendo Entertainment System was only 2 years old in the USA at this point, and there was nothing on the system that was WWF-branded, never mind nothing that had true realistic imagery of famous wrestling entertainers of the time.

The part about MLW that's funny is that it was originally billed as a strategy game: 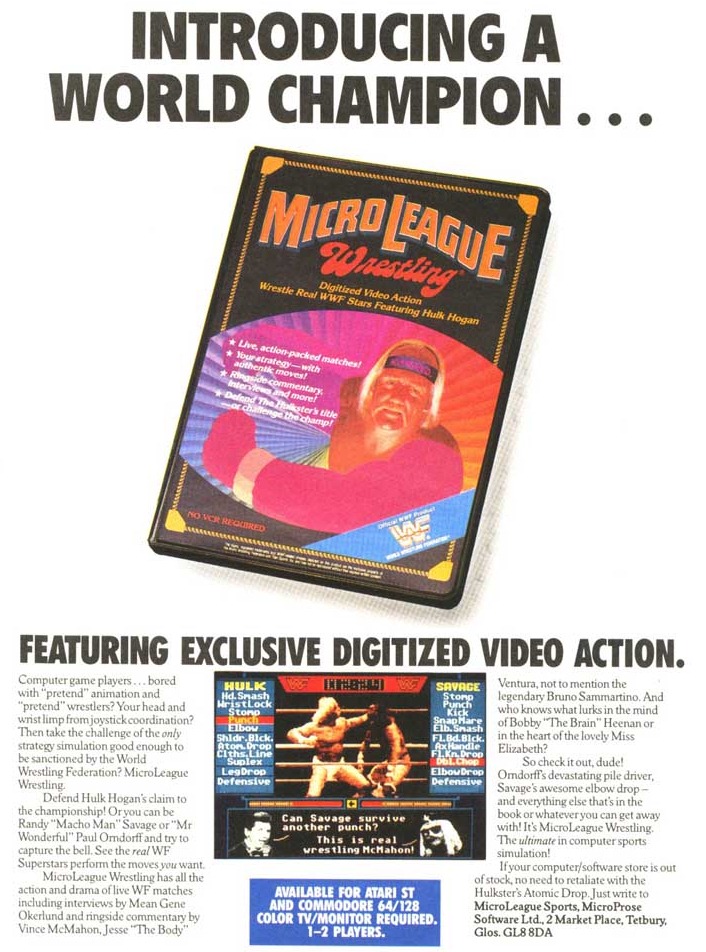 At the bottom of the advert it does outright say, "...take the challenge of the only strategy simulation good enough to be sanctioned by the World Wresting Federation".

The problem however is that this game has zero strategy to it. It is literally luck of the draw whether you win or lose a match no matter which wrestler you pick. Sometimes you can even pick the 'finisher' as your first move and game may accept it. Even crazier is that sometimes you actually win the match that way - in one move. Doesn't happen often, but it's possible.

Okay, so you know for '87 this game was pretty good because the NES had nothing like it. Now comes the part I can't put into perspective for you unless you were around during that time, and that part is HULKAMANIA.

When Hulk Hogan won the championship title for the first time against The Iron Sheik in 1984 at Madison Square Garden, commentator Gorilla Monsoon said "Hulkamania is here!", and that's where the word was first heard. Throughout the 1980s you could see that word plastered on all sorts of products. T-shirts, bandanas, hats, mugs, lunchboxes, stickers.. it was everywhere. WWF made a fortune off made-up words like "Hulkamania" and "Hulkster" plastered all over cheap merchandise.

In 1987 I was 12 years old, and was totally into WWF. I watched WWF whenever it was on TV and absolutely couldn't get enough of it. In fact my father routinely took my sister and I to WWF match events in Massachusetts to a place formerly known as the Worcester Centrum.

Why did we all love Hulkamania so much? The answer to that is a combination of things.

First, there's Vince McMahon's vision of wrestling as "sports entertainment", which is another term for "drama for men". This drama totally worked, and we all thought it 100% normal to watch guys in colored underwear throwing each other around, following schmaltzy storylines and loving every second of it.

Second, there's the comic book style factor. In the way Vince portrayed his entertainers, all had some sort of character to them. There were "good guys" and "bad guys", and it was made very clear to you, the viewer, who was on which side. Wrestling entertainers were made purposely to look like action figures in form, physique and costume (once a wrestler had a decided look, that look always remained the same unless he 'changed sides').

Third is the fact that nobody brought sports entertainment to television before like Vince did. Yes, there was wrestling on TV before WWF, but it was done in a very shoddy way. Lighting was poor and there was rarely more than two camera angles. Vince stepped this up several notches by having cameras at the ring entrance, walkway, ringside and two to three zoomed-in long shots from outside the ring in special camera booths. He basically shot matches just like a pro football game but in a much smaller space, and it worked. At the ring he had carefully chosen colors for the best possible shots, namely the huge use of blue for ring mat color, floor mat color and mat drapes - all of which look perfect when shot on Betacam. WWF matches on TV just plain looked great even if the match sucked.

I had to have it

When I saw MLW on the shelf back then, oh yeah, I just had to have it. I don't remember how much the game cost, but I know it was not cheap. The game was probably somewhere in the neighborhood of 35 to 40 bucks.

In the late 80s I wasted away many hours playing MicroLeague Wrestling, and was happy to do it.

I hadn't played MLW in close to 25 years. It was like.. super-nostalgia-juice playing it again. I played a few rounds and thought it was awesome. Glad to have found it again.