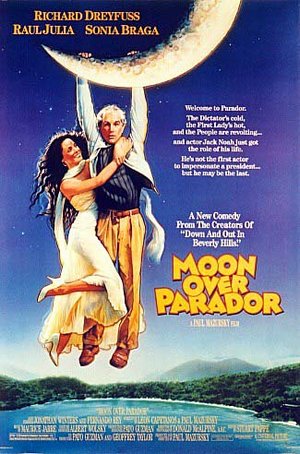 Moon Over Parador (1988) is one of those movies where I seriously cannot remember whether I saw it in the theater, rented it or saw it on TV. Part of my brain thinks I actually saw this in the theater; another says no, I must have rented this (I did sometimes rent movies I ordinarily never would just because I was in the video store and had to rent something so I wouldn't leave empty-handed); and yet another part says I must have seen this on TV as one of those filler movies during the summer. I just don't remember.

What I do remember is that yes I actually did see this film and not much else.

When I saw this title pop up as a new addition on Netflix, I watched it solely because I remembered the name of the movie and that I'd seen it before. So I watched it.

This is a dumb movie and did awful at the box office. It cost an estimated 20 million to make and only grossed 11.4 million. I've no idea why anyone thought this story would make a good movie, because it just doesn't work. But the funny part is that even as bad as this movie is, it's entertaining. It starts off painfully slow, but once it gets going it's not bad. Most of the humor throughout is feel-good type, and the ending is also feel-good as well, so the ending of it is satisfying - even if totally unbelievable (as in literally, not as in being amazed).

As far as plot holes go, there was nothing obvious, save for one part which is almost a hole and barely covers itself up. I won't get into too much detail concerning what it is (just in case you want to watch this movie), but I'll just say that when the assassin revealed himself, I immediately thought, "WAIT A SECOND.. how did that guy know who the President really was and know what he wanted to do?" I actually had to think about this, and then remembered, "Okay.. it's possible that the lead character could have covertly communicated with the guy over the course of the night, revealed who he was and then made his plans that way." That is a huge stretch to assume that much, but like I said, it was possible, although just barely.

There's another part that doesn't work either, and that's the very end of the movie. There's a weak attempt made in the story in which you are attempted to be led to believe that the lead character might have been making the whole thing up. The reason this doesn't work is that the time of day is the exact same at that point in the movie as it is in the beginning of the movie, so it's assumed when he was telling the story that less than an hour had passed. And there's absolutely no way the lead character could tell a story that detailed in that span of time, so the "Did he make it all up?" factor just did not work. At all.

Like I said, dumb movie. I will admit it does have a few good moments, and the characters were actually not too bad. But the story totally sucked. If you have absolutely nothing else to watch on Netflix, watch Moon Over Parador. You could do worse.