New betta fish and other stuff 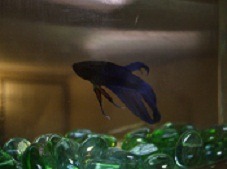 My old betta fish was looking real raggedy and his time was almost up (you could tell,) so I put him out to pasture (flush) and bought a new one. He is pictured at right; his name is Lil' Blue because I my last fish's name was FishFace and I didn't feel like reusing it.

Betta fish are hard to take pictures of by the way. Definitely not the easiest thing in the world. The pic you see was the best I could get. Whenever I pointed the cam at him he'd turn to see what it was, so I had to keep moving it around until I could get his side. I also had to do it with the flash off so I didn't blind the little dude (hence the reason he looks so dark.)

Since switching to the Disqus comment system, some of my old (and sometimes really old) blogs are getting new comments on them. Either the Disqus system is breathing new life into the older content, or people just feel more comfortable using it. No idea.

It could also be because of the theme I'm using now, being it's a full-screener with bigger fonts that are easier to read. The WordPress theme I'm using in particular (plaintxtBlog) seems to "agree" with Disqus quite nicely.

I'm still waiting for my Wii Fit. I called Dell yesterday and they said my Wii Fit will arrive before the 30th of this month (September.) Hopefully it will. When I called the hold message said they were experiencing supplier problems, so at least I know why it's taking so long to get here. Hey, they were honest about it and didn't try to give me a runaround, so I really can't complain. Guess it'll get here when it gets here.