not exactly 1.21 jigowatts, but brighter nonetheless 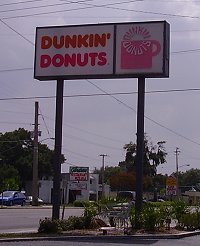 I changed almost all my bulbs to CFL's in my apartment. After all, there is no need to waste electricity and it can save you a few bucks on the light bill. There were 3-pack sets of Sylvania 15-watt CFL's on sale at K-Mart for ten dollars each. That's a very decent price, so I bought two sets. I was able to change every bulb except for my ceiling fan because it uses one of those itty-bitty bulbs - so I'll be picking up one of those mini bulbs later.

Strangely enough, a 15-watt CFL shines more light than a standard 60-watt incandescent bulb. (I bet you didn't know they were called that, did ya? Read my blog and you learn stuff. Who'da thunk it?) Hopefully they'll last a while.

Tip: If you want to use CFL's that most resemble standard bulb light, get the ones that have a 2700 Kelvin temperature, which is "warm white". Anything above 2700 has a different color, from yellow-ish (3500) to stark white (4100) to really stark white (6400). It doesn't matter what the wattage is; Pay attention to the Kelvin temp.

I stopped to get a coffee at a local Dunkin' Donuts on Busch Boulevard. They still have one of those old-old signs that shows both the old and the current DD logo, so I snapped a pic of it (as you can see here). The coffee I ordered tastes okay.. nothing great.. just okay. DD coffee just isn't what it used to be. I got one more or less thinking it would taste great seeing that I haven't had coffee from there in a long time. I was wrong.

But I will drink it. Cost me almost two bucks!