Playing funk on the Squier Jazzmaster and Yamaha RBX170EW bass 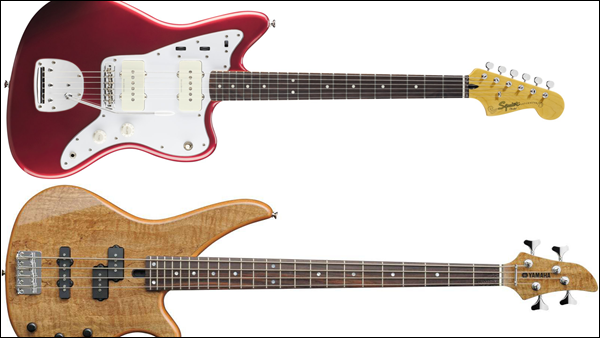 The Jazzmaster is not the first guitar that comes to mind when wanting to play funk. I did it anyway. 🙂

I decided to try an experiment to see if my Jazzmaster could actually get a funk sound out of it. This is a style of tone that's usually Strat-only territory, but I gave it a try anyway. This is the result:

Not too bad, especially since I don't ordinarily play funk.

However, the real thing that makes funk work isn't the guitar. It's the bass. Without a good bass line, the funk just doesn't happen.

Ever since I put the GHS round core Bass Boomers on my Yamaha RBX170EW, that's allowed me to get more funky on the bass guitar. While true the strings are still new and have a bit of that "sounds like a piano" thing going on, I'm really liking the GHS set, and over time they will lose a bit of their brightness (desirable in this case) so they don't sound so "pingy" when playing them.

As for the Jazzmaster, yes I can play funk with it, but I'll have to experiment with some techniques and tone adjustment to make it sound better.

As for the bass, I've a little more to say about that.

My journey with bass guitar strings

Originally, I used generic roundwound stainless steel bass strings. These are strings you could literally put on a bass guitar and keep them there for 10 or even 20 years because they never rust. All you have to do is boil the strings in water every few months to clean off the finger grime and that's about it (yes, you can do that with stainless steel strings.)

The tradeoff for me is that bass strings typically wreck my fingers, so I needed something else.

I tried flatwound strings. It was a La Bella set. An example of a specific set that many players like is the "Jamerson size" 52-110 Original 1954 set. What I didn't know about flatwound then but do now is that they are really tight when tuned up to pitch. That, and I missed the feel of the grooves of the string, so that didn't work out for me. Yes, there is such a thing as "low tension" flats, but I really wanted to feel the actual grooves of the string winds again.

Next up I tried D'Addario Half Round, which is a set with a semi-compressed wind on it. You can still feel the grooves, but it has the feel of a flatwound, sort of. I didn't like these for a few reasons. First, it's a roundwound sound with a flatwound feel. Weird. Second, every set comes out of the box feeling sticky. They all do this. There's some kind of coating on the string. Eventually it wears off and feels normal, but again, weird. Third, I didn't like the tension of the string. Still a bit on the tight side, and the 1 string just felt really thin even though it's physically thicker than a normal stainless set.

After that, I went with the Dunlop DBN45105 set. I went back to regular roundwound steel strings, but this time used one with a slightly looser tension. This I liked. This felt right. It also sounded right. However, something was missing but I didn't know exactly what.

Then I went to NAMM, and while there went by the GHS booth. While there talking with the sales guy for GHS, he spoke about the round core set for bass. That sounded interesting, so he gave me a pack of them. After I got home, I put the strings on, and...

...that was the string I was looking for. It's a nickel plated roundwound string with a round core in the center, which to me has the right tension I was looking for, that being a bit bendy and loose. And it sounded correct.

How will they react once they stay on the bass a while? I don't know that yet. What I do know is that my fingers don't get nearly as wrecked on them as they do with regular stainless steel strings.

Hexagonal core a.k.a. hex-core strings are stiff by nature, and it's also used as a selling point because a stiffer string at pitch rings out longer. But it's the stiffness that turns me off from it on the bass guitar.

On 6-string electric, I use Dunlop DEN0942 exclusively, which I believe are hex-core. That set has a feel to it I like, a sound I like, and a very fast break-in time.

On the bass however, the round core from GHS is far better than any hex-core I've tried. For light plucking with fingers, it just has a way better feel to it.

Does this mean more funk/disco style tracks in the future from me? Maybe. 🙂