Possibly the best Epiphone SG ever 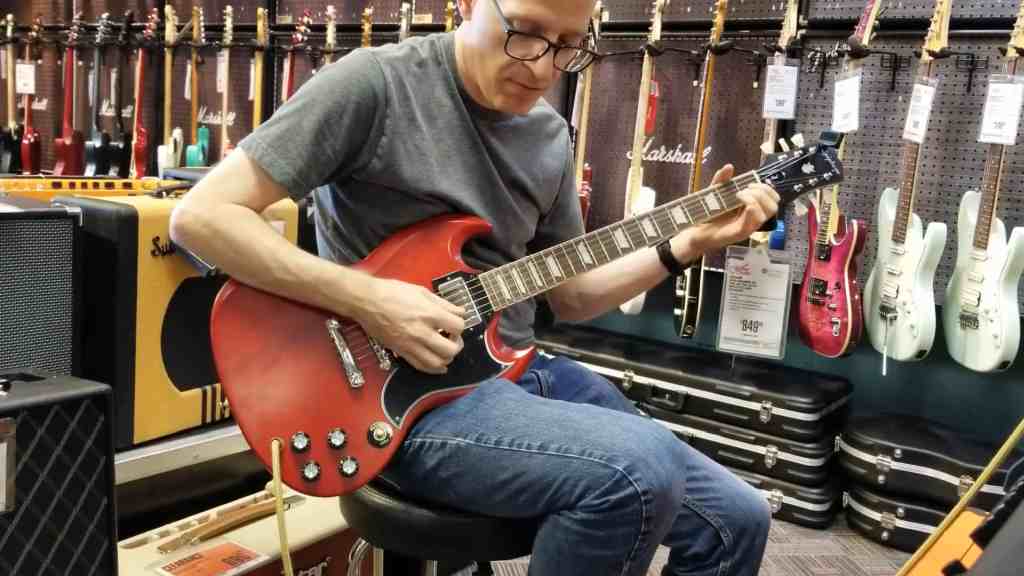 I've had an SG on my radar for a while now, and this one, the 1961 Epiphone Les Paul SG Standard, is actually amazing.

But wow, Epiphone has a fairly big ask concerning the price. It's not cheap for an Epiphone. Not expensive either, but still, a big ask.

You do get one seriously good SG with this Epiphone...

...but for just a few hundred more you could get a new Gibson SG Standard.

Honestly, it's a really tough call whether to go Epiphone or Gibson here, due to the fact the Epiphone is such a nice offering.

This guitar is an SG yet it isn't because it's a special model.

What makes this Epiphone so great?

If you happen to try one of these out, you'll be amazed at how good the tuners are, which is usually something not that great on an SG. They are buttery smooth and feel very solid.

The pickups are voiced exactly correct.

It is "aged" but not distressed, thankfully. This basically means it's not shiny-shiny as a new SG typically looks, but rather slightly dulled (in a good way) throughout. I qualify it as looking "new vintage". Very tastefully done.

I'll put it another way. A new shiny SG tends to look slightly toy-like, but this Epiphone escapes that. And it's not just because of the body finish. The plastics have an aged look, and the fingerboard inlays are purposely not super-shiny either. You'll see these aged touches throughout the guitar.

I do like seeing the "pineapple" on the headstock, which is a very SG thing. My preference is actually the "split diamond" headstock treatment on the SG Custom, but this is a Standard so it just gets the pineapple - and I'm totally okay with that.

Even though one of my favorite Epiphone SG's is the G-400 Les Paul SG Custom with the triple pickups, the split diamond on the headstock and all that good stuff, I like the '61 Les Paul SG Standard better.

Why do I like it better? To me, it's a better player's guitar...

...and that is its best selling point.

Great for the guy who owns a nice Gibson Les Paul and wants a really nice SG without committing to another Gibson? Yes.

Great for a first guitar? No. Too expensive for that. Epiphone makes the regular SG Standard to fill that duty at a much nicer price.

Great for the guy who has never owned an SG before and wants the best there is for the lowest price? Yes. And yeah, that's true even though the '61 Epi SG has a big-for-Epiphone asking price.

I did seriously like Epi's '61 SG. Very solid build, sounds great. The only true competition it has is the Gibson SG Standard.