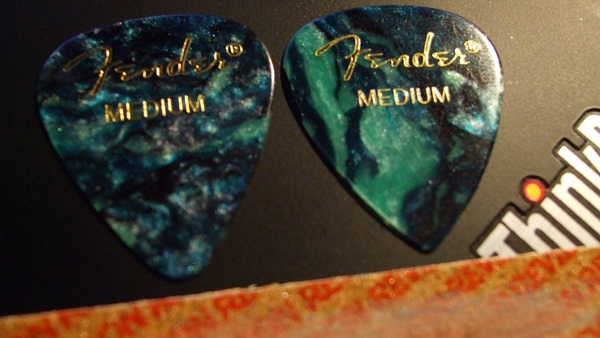 My guitar pick of choice these days is the Fender 351 Premium Celluloid in medium thickness, "Ocean Turquoise" color. It's a great pick, but the problem is that celluloid wears out real fast.

In the photo above, the pick on the left is only used slightly. The one on the right was heavily used, but you'll notice the point on the bottom is much sharper compared to the one next to it. That's because I repair my own picks.

How? By what's seen at the bottom of the photo, an emery board, commonly known as nail files.

I purposely buy Revlon emery boards to shape guitar picks with for two reasons. First, they are available in a 24-pack (which is what I linked) where most other packs are of a much lower count. Second, Revlon boards are very consistent. With other boards, at least half the pack will have grit that's too coarse or too smooth. Every Revlon board on the other hand is almost exactly the same, with only very minor grit variations.

You may see the price of those Revlon boards and say, "Whoa! Expensive!" Trust me, they're not. Remember, there are 24 of them in the pack. Divide the price by 24 (remember, free shipping) and you'll quickly realize you get a lot for cheap.

If you use picks that are .88mm or thinner, periodically filing the point with an emery board will make them last longer so you don't have to replace as often.

I call this a "poor man's" guitar pick fix because it is so cheap to do. In reality, there really is no better way to go about it. Using a machine like a Dremel rotary would file off way too much way too fast. When you want to make picks last longer, you have to file them down by hand. Fortunately it only takes a few minutes to do per pick.