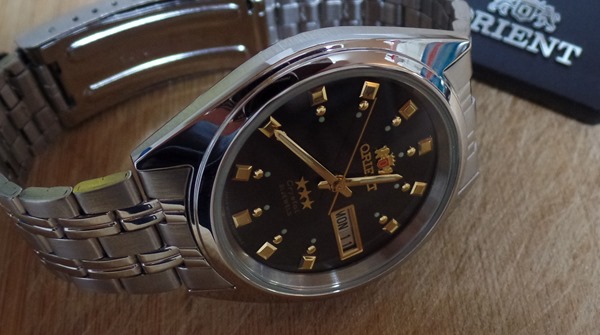 A back-to-basics Japanese self-winding automatic. And it's really cool.

This watch was gifted to me by reader Chuck (thank you, Chuck!), so my total cost for this particular timepiece was $0.00...

...but this is absolutely worth buying. What a steal this watch is for what you get.

I've seen this watch go by not one but three names, Orient Three Star, Orient Tri Star and Orient Crystal. I've also seen two different dials. One has blocks and the other sticks. As you see from the photo above, I went with blocks, which is what I wanted.

Supposedly, the proper name for this timepiece is the Orient Three Star, sometimes written as Orient 3 Star.

I've not seen any of these watches for sale under the model name Crystal. Some call it that because the word Crystal is physically printed on the dial just below the three stars.

As you'll see from the links above, a whole bunch of people call it the Tri Star, so... whatever, I guess. Three Star, Tri Star... doesn't really matter.

This is my very first mechanical watch; it has no battery in it whatsoever.

This is also my first self-winding automatic watch.

This is also my first watch to feature a second hand that beats 21,600 times per hour (as in 6 beats/ticks per second.)

Lots of contradicting information from listing to listing about the Three Star. However, I measured the thing myself, so now I have the accurate figures.

This watch fits on my wrist very nicely. I do have small wrists, but had to remove 4 links to get the bracelet to fit. Also bear in mind that the clasp has 8 micro adjustment holes, which is quite a bit.

In other words, unless you have Sasquatch-sized wrists, it should fit just about anyone.

The Three Star to me is old-school Japanese watch styling. And believe me, its look totally works.

What I was first taken by out-of-the-box is how much better the watch looks in person compared to online photos. Night and day difference. In product photos, the Three Star looks cheap, but in person it looks like a proper gentleman's watch.

Ordinarily, I do not like a watch dial that is nothing but symbols, but the way the Three Star is designed works well.

For some, the date window might be a little too small, but I'm totally okay with it.

When I found out this watch was coming my way, I looked up some information on it. I'm glad I did, else I would have been quite confused (only because of my inexperience with timepieces like this.)

One crown, one button

On the right side of the case is the crown, and above that one button.

The button's only function is to adjust the day. You adjust the time until the day changes after passing midnight, then set the day from there. The days are stated in both English and Spanish. Pick the day in your language. Easy enough.

The way to wind the watch is dirt simple. Either just wear the thing and walk around, or hold the watch in your hand and shake it (gently) back and forth. When you do this, you actually hear the spring winding. And because it's a self-winding automatic, there is no way to overwind it, as there is a clutch inside that will disengage the winding once full tension is reached.

How long do you have to shake it so it runs all day (and usually well beyond that?) A minute or less. Takes hardly any time at all.

The reserve is reported to be about 45 hours. If you don't move much, just shake it back and forth for a minute or so every morning and that's all there is to it to keep the watch running.

The Three Star's movement does not have hackable seconds. The instant the mainspring has tension, the second hand starts and there's no way to stop it until the watch winds down.

What this means is that there isn't any way to set super-precise time on the Three Star. At any time you will be anywhere from 10 to 30 seconds off, which on this watch is not a big deal.

The 2-second test, as I first mentioned here, means a watch dial design that passes that test is good if you can glance and read the time from it in less than 2 seconds.

The Three Star does pass this test for two reasons. First, it has an uncluttered dial, and second, the minute hands are as such where they can be distinguished just about anywhere...

...except the 3 position, because that's where the date window is. When either hand is over that, it gets a bit washed out. Not really a big deal, I suppose.

Minute indices in 5 minute increments only

The Three Star's dial has indices spread 5 minutes apart. In between those indices is nothing.

Was I upset about this? Surprisingly, no I wasn't. And the reason for that is it's easy enough to estimate what the minute is between any of the two indices.

...is darned near perfect.

First, it's a quiet tick. Lovely.

Third, when away from the ear, you don't hear it at all.

It's a tick done right, that's for sure.

Functional, but feels a bit cheap. I'm personally okay with it, but it is a bit thin and the edges are a little sharp.

Fortunately, it would be very easy to change the bracelet out to something else, such as black leather or a NATO, if desired.

Is this a real Japan movement?

This is the bottom of the Three Star's dial in the smallest print ever. Sorry about the slight digital grain, I had to zoom in real tight to get this shot: 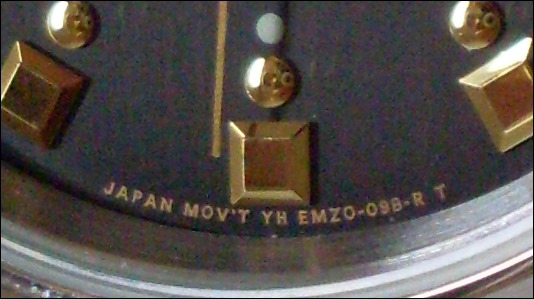 I tried looking up my Three Star's caliber information from the case back, but that didn't really lead me anywhere.

Unless what's stated on the dial is blatantly lying to me (which I doubt,) I do believe the automatic movement is truly Japanese. I don't know if this means the movement was made in Japan or designed in Japan and constructed elsewhere like Thailand or Indonesia. Not a clue. All I know is that the dial states it's a Japan movement.

Why does this matter? Some watch enthusiasts consider this information to be a big deal even on low-end models like the Three Star.

There are three things I don't like about the Three Star.

First, the metal bracelet, while nice and light, feels a bit sharp around the edges. An oyster bracelet this is definitely not.

Second, I've already managed to scratch the case. The stainless steel somehow got a little scuff near the 6 position in less than a week of owning it. I imagine with regular wear that my Three Star is going to get all sorts of scratched up over time. Then again, that's what happens when you wear a watch regularly.

And yes, I do plan on wearing it regularly because I actually like this timepiece quite a bit.

Third, the lume is totally worthless.The hands have lume and there are dots on the dial for every index except the 3 position because the date window is there. But it's a very low-powered lume and there's no way to read this thing in the dark.

The Three Star is a great introduction to a self-winding automatic. It's a simple watch that's easy to figure out. Definitely the easiest day-date analog I've ever used. For the price, you really can't do any better.

I think the best reason to buy an Orient Three Star is just for the fact it's a "workhorse automatic." It looks nice enough, it fairly light for what it is (mine after removing links to fit my wrist is just 81g,) it seems to be accurate from my experience with it thus far, and yeah, good watch. I'm happy to own it.