One feature in YouTube is the ability to publish a video as unlisted. This is actually really neat because you can post videos and share them with anyone without having it publicly listed.

Prior to the unlisted option, the only way you could share a video without it being publicly listed was to have it set to private, but that only allowed you to share it with up to 25 people. The unlisted option allows unlimited sharing. This is great for those that like YouTube, want to share out videos but also want to completely avoid the YouTube trolls. Unlisted videos do just that.

Bear in mind that while the video is unlisted, anyone that gets the video link can still view it. You can consider the unlisted option "semi-private".

How to make an unlisted video:

2. During the upload process, set it to private.

3. After uploading, to go "My Videos", and click the Edit button: 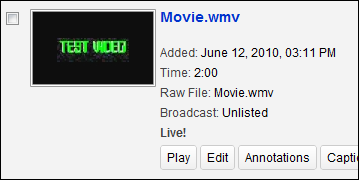 4. Under Broadcasting and Sharing Options, you'll see the Unlisted option there.

Is your unlisted option grayed out?

If you have a YouTube account that has any copyright strikes against it, the unlisted option will not be available for any of your videos. Maybe this will change in the future, but for now that's the way it is.

In the end, the video is shareable, but not listed. For most people, this is a good definition of "private" for a video posted to the YouTube site.

Is there a different video site that has the unlisted video option?

DailyMotion has it the last I knew. However, you might want to get a newer webcam for use with that site, as for whatever reason videos rendered with newer cams seem to work better there (and on YouTube) than those made with older cams.