Here's a photo of how much wrap I use on "through the post" tuning posts: 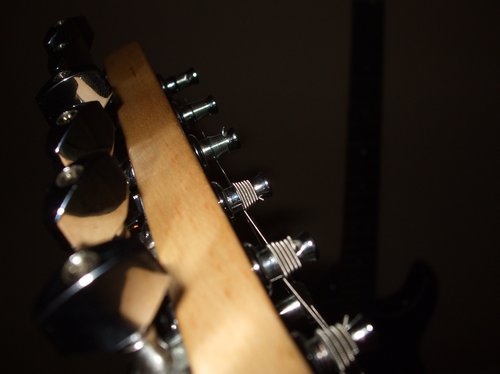 I use a lot of string wrap for one simple reason: To avoid string guide "chinking".

On most Stratocaster guitars there are string guides, also known as string trees. The primary reason they exist is to keep the string in the nut. Without the guide, certain strings would periodically pop out of the nut while playing.

Some Strats have two string guides and others only have one. What determines whether the neck has one or two guides on the pegboard depends on the construction of the pegboard (as in the headstock) and whether or not the guitar has tuning posts of differing heights, sometimes known as staggered or height-adjusted posts.

The 5 and 6 string on Stratocaster guitars do not require a guide because the length of string is short enough from the nut to the post where it will not pop out while playing.

Stratocaster guitars with no string guides either have staggered tuning posts (like the Eric Johnson Stratocaster) where the posts are differing heights to lower the angle of the string, eliminating the need for string guides. Others use a metal roller nut that specifically lowers the angle of the string as it exits the nut to the tuning post so the guides aren't necessary.

However on most Strat and Telecaster necks, there's at least one string guide there and it's a "necessary evil" to keep your strings in the nut.

My Squier Strats have two string guides, so what I do is purposely put as much wrap as possible on the 1, 2, 3 and 4 strings to specifically lower the angle of the string from the post to the guide. What this does is put less tension on the guide and decreases "chinking" noise when performing string bends.

No, this does not eliminate string chinking noise at the nut, but more often than not when you hear the chinks, it's probably coming from the guides and not the nut itself.

Does this make strings last longer?

In my experience it does because there's not as much friction on the guides when bending strings.

Would switching over to low-profile tuning posts help with string life?

Yes. If you switch out the standard tall-post tuners with vintage style, you can get the angle of the string a lot lower, dramatically reducing friction on the string guides.

Is there a cheaper way?

Yes. You could put a small piece of black electric tape under the guides which will do the same job. If you put a lot of wrap on your tuning posts and have electric tape under the "branches" of the string guides so the strings rest on the tape, this basically eliminates all chinking noises on the guides 100% - and the best part is that this is a dirt cheap solution that doesn't require you to buy new tuners.

I personally don't use electric tape because I change out my strings every few weeks. My strings don't usually start to "chink up" until they get old, and by that point it's time for a string change anyway.

On a final note, no, do not put electric tape on the nut. That will raise the string height significantly and cause tuning problems when the tape gets wrecked from the steel string.

The very-old solution to making a nut smoother for string travel to eliminate chinking noise is that when your strings are off, fill the nut grooves with graphite shavings. Take a razor and file off shavings from the black writing portion of a standard pencil (which is almost always graphite mixed with a clay binder), and fill the grooves with that. Once the strings are on, clean off the excess graphite (usually just by blowing) and that's basically it. Very old-school, but still works.