I only own 3 Squier guitars. However in less than a year I've gone through 6 of them, chasing tone left and right until I finally ended up with what I have now.

It's becoming a common misconception that I still own a whole bunch of Squiers. I don't. Just 3.

Here's how it's all fared out from beginning to present (Note: this does not include any of my other guitars, just the Squiers) 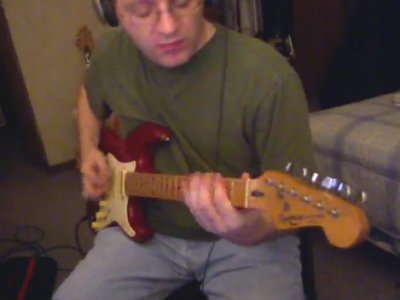 My first guitar, bought new for $212 in 1990. I remember the price because the guy who sold it to us lied and said it was used just so my father would buy it. It was new. 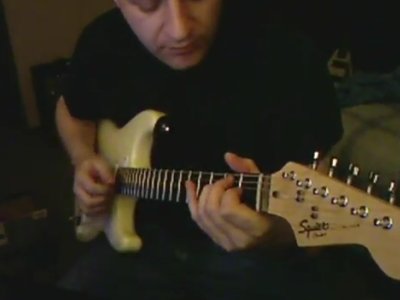 This is the one known as "Banana". My second Squier ever purchased and bought new in February 2011. 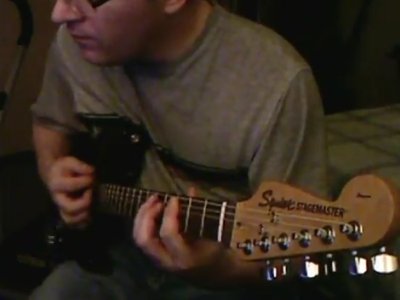 This was the time when I decided I wanted a humbucker guitar in my setup that was specifically made by Squier or Fender.

The day I bought this October 2011, I had intended on buying a Squier Bullet Strat HSS, but I saw this and thought it was cool, so I bought it. Purchase price was $110.

I got rid of it because I found out she had a 12-inch radius neck, which doesn't agree with my hands - although I did appreciate the HSS setup it had. It was a very nice and very well-built guitar. It was also the first I ever owned with a reverse headstock.

Once I found out the Stagemaster was a 12-inch radius (which answered why it didn't feel right to me when playing it), I sought out another Squier with a humbucker in it. The Cyclone was just released.

The Stagemaster was traded for this and it was ordered in the store since it wasn't in stock. When it arrived, there were paint defects, so I had to send it back. I never took it home, because when I found the defects in-store, I sent it back right there.

The replacement Cyclone arrived, and it was even worse than the first one. Paint defects and neck dents.

Squier had just released the new 2012 Vintage Modified series, so I decided to go with one of those instead.

Like the first one, I sent this one back right there in-store. 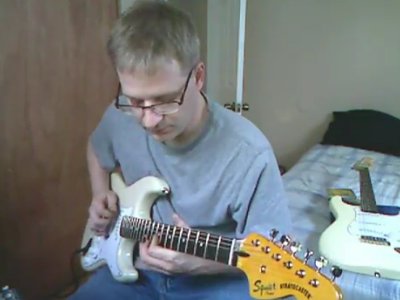 This guitar was a huge pain in the ass to get because I was given the runaround for months until it finally arrived. I was very happy to get it when it did arrive - until I found a paint chip in front of the bridge. Sent it back.

Given the fact I waited months for this thing only to discover a paint chip, you have no idea how much that ticked me off. Were it an off-the-shelf thing, I would have dealt with it, but to wait months only to get something that wasn't perfect after already receiving two bad guitars beforehand, and well, you can imagine how ticked off I was. 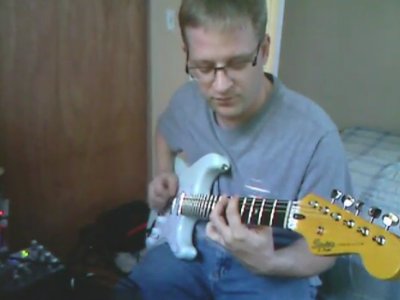 I only took this guitar because it was all Guitar Center had in stock where I could have a tech personally inspect it for defects before taking it home.

There was absolutely nothing wrong with this guitar, build-wise. Paint was correct and all hardware was correct - but I hated the sound of the lipstick pickups. I simply couldn't use them for anything.

In an act of desperation, I took the pickup set and electronics out of my '93 USA Strat with the busted neck and put them in the Surf. It worked, but I still wasn't getting the sound I wanted out of it.

I decided to deal with this and make do, but then the bent steel vintage saddles really started ticking me off. You can only adjust those things so much, and I missed the level of adjustment I could get out of block saddles. It was at that point I said "screw it, this thing has got to go and I have to get a guitar that has all the specs I want". 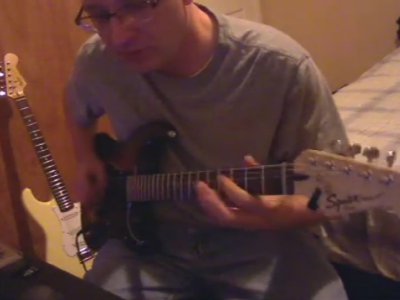 And here we are at the Bullet HH I just bought.

I find it a bit ironic that I had to buy another Squier Bullet model just to get what I wanted in the first place.

This guitar was the exact same price as the Squier Bullet Strat I bought in 2011. It's an HH setup, looks great, plays great.

It did arrive with a volume knob that didn't work right. Took it to a shop and had it fixed for 10 bucks. Other than that, no defects.

The money I lost?

If I were to tally up all the costs involved getting to where I am now from Squier #3 to Squier #8, I lost about 75 bucks.

The trade from the Stagemaster to the Cyclone(s) was an even swap, and Guitar Center ate the cost on the VM and the VM Surf after that. When I traded the VM Surf in for the Bullet HH, I actually got credit for that since the Bullet was worth less new.

The cash I lost was basically in the gas it took to drive to Guitar Center so many times. 🙂 And the 10 bucks I spent on the volume knob fix for the Bullet HH.

So in the end, it was the price of the original Stagemaster + gas spent driving all over the place + a 10-dollar cheap fix for a grand total of $185 to get to where I am now.

Now if I had bought each guitar individually with no trade-ins and no store credit, then oh yeah I would have spent a ton more. But I didn't.

It's easy to assume I blew through a ton of cash considering all the Squier guitars I've been through in less than a year, but the bulk of it was all returns and trade-ins.

Am I done buying Squiers?

For now, yes. I am so done it's not even funny anymore. 🙂 I will only buy another if something drastically goes wrong (like a major hardware failure or one of the guitars breaks or whatever).