Finding "that perfect Casio watch" is a bit of a tall order. But it can be done if you do some research.

I like Casio wristwatches. I've bought a few over the years, and it's a fun hobby because they're cheap and plentiful.

Who wears a watch anymore?

I do, because pulling out a phone just to get the time is stupid when you can get that information from your wrist faster and easier. That, and smart watches at this point are still stupid because at best, they can only hold a charge for about 5 days before needing a recharge. Oh, and another thing. You have to really, really careful with a smart watch because they are so easy to ding up. It's just a stupid idea to own one presently. I'm sure they will improve, but that's in the future and not now. Presently, the old style Casio digital wristwatch is still the way to go - if you get the right one. And that's where my Casio watch collecting adventures come into play.

...is something that shows weekday/day/month on the face, has an alarm, a countdown timer and a nylon or Casio-specific metal watch band.

Now as far as the nylon band version of something like this, I already own it: 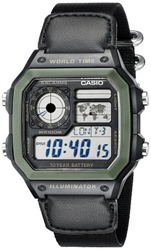 This watch is loaded with goodies. 10-year CR2025 battery, 5 alarms, over 30 time zone configurations, countdown timer, weekday/month/day on the face, water resistant, amber backlight, rugged construction. The only thing more rugged than this is a Casio G-SHOCK.

My complaint about this watch however is the way the face is configured. The time can be read just fine, but the smaller weekday/month/day above the time (which can alternate between showing that or auto-scrolling between 4 time zones) has one fatal flaw. The small black separator right above it casts a shadow just enough to where it interrupts the display.

My solution to this was to get another watch, this time with Casio-specific metal band (which means one where length can be adjusted by sliding connector and not adding/removing links,) this one:

While this watch does not have as many features as the AE1200 series, it's very, very close to being perfect. So close it's not funny.

Okay. This one has weekday/month/day on the face, amber backlight, a single alarm instead of 5, no time zones, stopwatch and countdown timer - but - it has a few things the AE1200 doesn't have. The alarm can be set to sound on a specific date. Nice touch. The display is far easier to read than the AE1200, yet is slimmer. The watch can be configured to flash the backlight whenever the countdown timer expires or the alarm sounds. Another nice touch.

Here's an example of two watches that supposedly do have the stainless steel case, but almost no features: 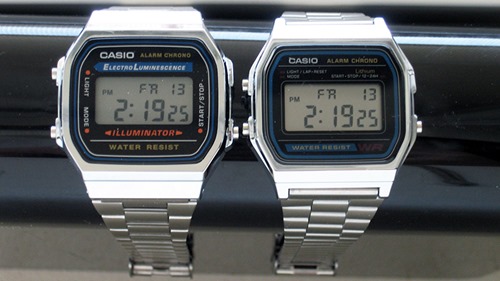 At left is the Casio A168W-1, and at right the A158W-1. Both have identical feature sets. The difference is that the 168 is slightly larger and has the "ElectroLuminescence" blue backlight (similar to Timex's "Indiglo") while the 158 has a standard and fairly useless single bulb backlight. However, I'd still buy the 158 over the 168 just because it has more retro flavor to it.

Anyway, both these watches only show time and weekday and day on the face, but not the month. They also both have stopwatches, single alarm and that's pretty much it.

If either of these watches had weekday, month and day on the face all at once, I'd buy one in a heartbeat even though neither has a countdown timer.

For some (for many, actually,) the 158 and 168 are perfect because it's metal everywhere but the face, meaning this watch can have the crap beat out of it for years and still look relatively decent with just a little polishing. You can't clean resin cases like that, but you can with metal cases.

However, I wanted something more that had it all, which leads to this: 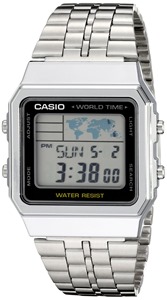 This, hopefully, will be the watch. I say hopefully because I have it on order right now.

To note, there are two versions of this. The all-silver-face version is the A500WA-7. Same exact watch, except all silver and the top right map is gray instead of blue.

The A500WA series is basically exactly the same as the AE1200, feature-wise. Same 5 alarms, same multiple time zones, same amber backlight, same countdown timer and so on. The difference is the case, the battery (CR1616 instead of CR2025, which lasts 3-5 years instead of 8-10,) the band and the face.

This watch has no plastic dividers on the face, and the little mini round clock seen on the AE1200 (which by the way is useless) is deleted. This means no cast shadows from plastic dividers since it doesn't have any.

Is the case metal? No. It's what Casio called "chrome plated." I don't know if that means chrome-like plastic or real chrome. But what it does mean is that it can take a beating more than paint can, so I decided to have a go, buy the watch and see what I get.

While the band is significantly wider than the B640WD-1A's is, I already know this watch and have a good idea of what it will feel like when on the wrist.

Am I totally done buying Casio watches after I get this one?

I didn't buy all my Casio watches all at once. My watch buying adventures has been something that's been going on for years. When I do buy one, I make sure it's as close to what I want as possible.

I really meant it when I said the B640WD is very close to Casio watch perfection, which is why I kept it. Same with the AE1200 I have. That one is also close to perfection.

This time around, it's the A500WA, and it's my last try at trying to score that watch that I'm totally satisfied with. I'm sure Casio will introduce some new models later that I'll check out in the future, but for now, my hopes are riding on the A500WA. I hope it's a good one.

Why bother going through all this crap?

It's like I said at top, collecting Casio watches is a hobby of mine. It's easy, fun, and most importantly, cheap. 🙂

On a final note, you'd be surprised how good a metal band watch can look. A classy timepiece with a metal band never goes out of style.

And if you think the metal look is good, Casio of course also has gold with band color to match.

Yes, the gold versions always cost more, as they are produced in limited numbers. But Casio arguably does make the best gold-look digital watches that exist. Depending on your taste, that means you may spend over $40 for one. For some, it's totally worth it just for the look.