I'm pretty sure any pro-audio guy who reads this is going to be thoroughly disgusted because the method described below uses old-school tech. But it works and it can be done very cheaply. And yes, I mean CHEAP. Not "inexpensive". I mean cheap, as in stuff-you'd-find-at-a-garage-sale cheap.

The minimum required for PC hardware is an Intel 1GHz CPU, 2GB of RAM, a plain sound card with a "LINE IN" port, an 80GB hard drive that runs at 7200 RPM and the Microsoft Windows XP operating system or a lightweight Linux distribution.

The above in detail:

A PC with a single-core 1GHz processor can be found just about anywhere. These 10-year-old (or greater) computer boxes are so cheap that people practically give them away. You specifically want an Intel processor and not AMD because some older AMD's like the Athlon XP cause frequency noise in the sound card when recording, but the Intel does not. This doesn't happen with modern AMD CPUs, but it does on the older ones.

You do not need anything more than 2GB RAM for 32-bit Windows XP. About 99% of PCs with XP are 32-bit and not 64, so it's not something you have to worry about. 32-bit XP even though it's supposed to support 4GB RAM at the most will only support 3.2GB maximum, so it's a total waste to have anything more than 2GB RAM. As for the clock speed of the RAM, it doesn't matter. It could be the slowest RAM available and it will still work just fine for audio recording software purposes.

Audio does not take nearly as much hard drive space as video does, so any hard drive 80GB or greater will work. The only thing you have to watch for is that the drive runs at 7200 RPM and not anything slower. There are slower 5200 and 5400 RPM drives out there, and if you unfortunately have one of these, junk it for a 7200; this will be printed on a sticker on top of the hard drive in plain sight.

The back of a "plain" sound card looks like this:

The blue port is what you need to pay attention to, that's "LINE IN", and yes it is a stereo input. This means you can feed the analog output of a mixer into it easily. It is most likely true the cheap PC you pick up will already have one of these.

As for Microsoft Windows XP, well, everyone knows what that is. It's not in production anymore but it's been around since 2001 so it's not like you don't know it. And no, it does not matter if you have "Home" or "Professional" edition, because there's nothing in "Professional" that would give you any advantage when recording audio.

If the computer box you have doesn't have XP or you can't get a license for it, download Lubuntu for free and use that instead; it's a lightweight very-fast Linux that will run on old computers easily. It will also run modern web browsers like Chrome and Firefox. The only crappy part is that getting wireless internet to work in Linux is a bitch, but chances are the old PC you'll be using has no wireless anyway and just a plain wired network card, so this isn't a problem.

I suggest using the free Audacity, but since most people want to know what I use, here it is: 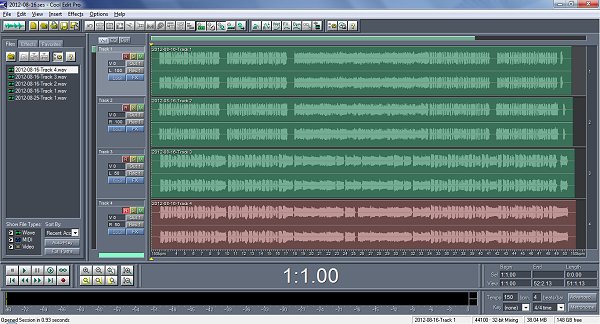 The above software is Cool Edit Pro 2.1. This is really old software that was last made under this name in 2003. This is before Adobe bought it and changed it to "Adobe Audition". I used Audition 1.5 for a good long while but eventually went back to CEP because it just runs better - even in Windows 7. Cool Edit Pro is not available for download as it's not made anymore, nor was it ever freeware.

CEP is my personal choice for recording software. If I didn't have it, I would use Audacity and wouldn't think twice about it, because it's the only thing I prefer to record with besides CEP. Like CEP, Audacity is very light in operation, doesn't give you problems, has all the filters and effects CEP does and works great.

Oh, and there's one other huge advantage concerning Audacity - it's multi-platform, meaning it can run in Linux. If your computer box is running Linux, you'll be using Audacity, and it's good to know this.

I use a very basic Behringer Xenyx 502 mixer because it's all I need. I feed a "Y" connector from the 1/4-inch left/right outputs to a stereo 3.5mm-input to the sound card (which for you would be the blue "LINE IN" port).

This is the exact cable that you need: 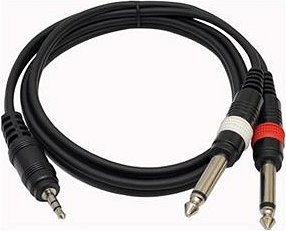 To note: If you're recording a full band, you're going to need a mixer with more inputs for the extra microphones and such. If you need the extra inputs, get the Behringer Xenyx 1202FX. Great mixer, easy on the budget, small but not too small, and even has built-in effects with 100 presets.

DO NOT bother with USB. Don't even touch it. If you do, you'll encounter a lag/latency nightmare ("pausing" when recording). Use an analog output from the mixer to an analog LINE IN input on the computer. It is not a sin to do this.

Yes, there will be some barely-there electronic noise when recording with analog. You will see this when recording with Audacity, but that's OK because you only hear it just before a recording starts. This means you can "silence" that part of any track just by highlighting it with the mouse and then using the "silence" filter. It's really not a problem, believe me.

Remember: Nobody will know you're recording with analog, because nobody cares. Well, nobody except pro-audio guys who will tell you you're doing everything wrong when in fact you aren't. If some pro-audio guy tells you "you're doing it all wrong", just ignore the guy, because he's obviously not going to give you the money for the super-awesome all-digital crapola. It's your money, and if you have to go cheap, then go cheap and record your way. Analog recording works and sounds just fine, because it's not like you're recording a symphony.

How much does all this cost?

The computer: You probably already have an old clunker computer, so this could be free. If not, try picking up an older Dell PC box. These things are everywhere just about anywhere in the world, and can be had for next to nothing. The only thing you'll have to spend any real money on may be a new hard drive. A refurbished Dell from Wal-Mart is the perfect super-cheap budget recording PC. It's $188! The only crappy part is that it's Windows 7 and not XP, but who cares? You can dump that for Lubuntu Linux (which runs really good on a Dell) and you're good to go.

The Y-connector cable: $10 to $20, depending on where you buy it (again, I suggest getting the 2-pack from the linked cable product above).

Total investment will be anywhere from $0 to about $325 after taxes/shipping. And yes, that is the total cost. Nothing more needs to be spent after that. Any other costs would only be for music gear such as a guitar effects processor and microphones.

What about the recording quality? How will my recordings sound?

Here's the deal when it comes to the quality of your recordings:

Give a guy inexperienced in recording $5,000 worth of hardware and say "record something great", and that guy will record nothing but crap.

Give a guy experienced in recording $300 worth of hardware and say "record something great", and he will.

What this means is that just because someone has crazy-good super-expensive hardware doesn't mean he knows how to use it properly. It's the same as "an experienced guitar player with the $100 guitar sounds great while the inexperienced guitar player with a $1,000 guitar sounds like crap". Experience counts both for playing and recording. If you have no recording experience, expensive recording gear will give you no advantage whatsoever.

What this also means is that nobody sounds great at first. Your first recordings, whether they're on cheap or expensive recording hardware, will sound terrible. And you know what? That's just fine. You will get better at recording the more than you do it.

In addition, remember that for the guitar player (and the bass player), a modeling effects processor is your best friend. Again, I will mention the DigiTech RP255 here. If you plug that sucker DIRECT into the mixer and don't use any amps, you'll sound good even with little to no recording experience. TRUST ME ON THIS ONE. If on the other hand you try miking an amp with little to no recording experience, you'll sound awful because miking amps for recording is never plug-in-and-go. It takes time, the room acoustics matter, and a whole bunch of other stuff needs to be taken into consideration that you probably didn't think of - nor would you want to. All you want to do is hit the record button and go, right? Right. Use modeling processing, don't bother with the miked amps, and you'll save yourself from a lot of frustration and headaches.

I mean, if you want to mike the amps, then go ahead. But it will prove to be a huge pain in the ass compared to using a modeling effects processor.

Anyway, there you go. Now you know cheap ways to record your stuff.