So I bought another guitar... 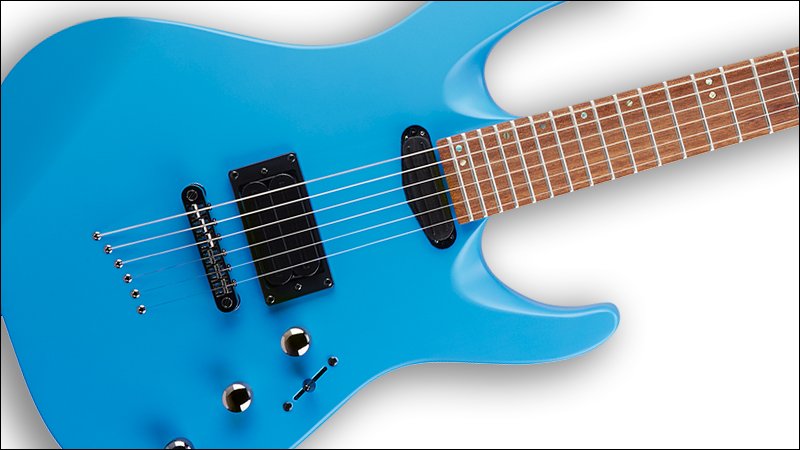 ...meaning I don't have it just yet. I'm also not going to say what brand or model it is, although some of you might recognize it. The reason I'm not mentioning brand or model is because I have absolutely no idea if this guitar will be any good or not since I broke personal guitar buying rules to get this thing. If it's good once I get the guitar, you'll hear more about it later.

I've not played this model at all, nor have I ever seen one in person. This means I have no idea what it feels like, very little idea what it sounds like (other than a few scattered YouTube videos) and only have seen it on a computer screen.

The personal guitar buying rules I broke were a) see the actual guitar in person in the color you want with your own eyes, b) play it so you know how it feels with your own hands, and c) hear how it sounds with your own ears in person, preferably through a crappy little amp (because if it sounds good there it will sound good through anything).

I didn't do any of that and instead just bought it.

Was that stupid? Yes. But I did it anyway.

Why did I buy it? The price was simply too good to pass up for what it offers. This guitar, which was already priced well to begin with, had the price further dropped another 41% for a Monday-after-Thanksgiving sale. That was a big reason I went for it, but the design of the guitar combined with the rock bottom price is what sealed the deal.

This guitar should be selling for at least $500 but it's nowhere near that. You'll understand why as I describe the features.

In this guitar is an H/H pickup set (the neck side is a humbucker in single-coil size) with a push-pull coil tap for single-coil like tones. That alone isn't all that impressive. But what is impressive is the electronics design, because there's a built-in way this guitar defeats the bridge side pickup overpowering the neck side. The knobs are volume-volume-tone instead of volume-tone-tone; this is a very simple yet very effective way to make the pickups "live together" volume-wise without any overly complicated electronics, and is very thoughtful design. If the bridge side is too loud, no problem, just adjust its dedicated volume control. Problem solved.

Both pickups use rails. This means absolutely no volume drop no matter what is played. For harder play, sometimes the wound strings get momentarily softer in volume. When that happens, the string is vibrating wide enough to be slightly away from the pickup pole piece it's hovering over, resulting in volume drop. A rail cures that 100% since the string is hovering over a rail instead of a circular piece. No matter how wide the string vibrates, the volume never drops.

Offset abalone inlay fret markers. Guitar companies, for whatever reason, usually charge a ton of money to get this look.

"Extra" carve on the inside of each cutaway for easier higher fret access.

24 frets on a neck with a super flat fingerboard radius while at the same time not having a paper thin neck.

What does this all result in? A guitar that can play rock while at the same time easily achieve Telecaster-like tones for for clean stuff, all with easy play anywhere on the neck and no volume drop anywhere.

Again, this is a thoughtfully designed guitar - assuming it plays well, which it may not. I won't know that until I receive it.

The only other guitar I know of with a (mostly) rock bottom price that can do this is the Ibanez GRX20. You will look at that and think, "Wait... that guitar can't do single-coil sounds because it doesn't have coil split nor tap." Wrong! That guitar has a 5-way select switch, of which two selections are single-coil settings: 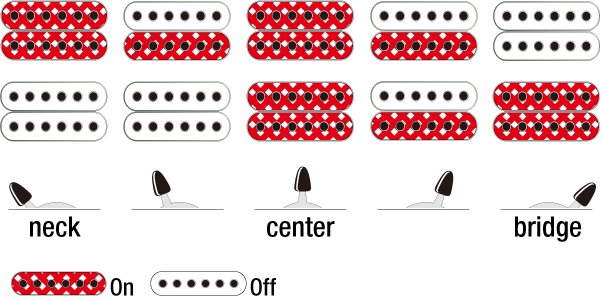 While not as thoughtful of a design (only one master volume, one master tone), the GRX20 does have one of the best switching systems for the H/H pickup layout. The 1-3-5 positions are standard. It's 2 and 4 that are oh-so nice to have. One is the same as a Strat "quack" pickup setting on a Strat, and the other sounds very similar to the neck-only pickup setting on a Strat. No fancy electronics required. You literally just flip a switch.

And yeah, I almost bought the GRX20. But the guitar I bought instead has more Tele-like tones with the coil tap. I already have a Strat for the "quack" stuff and it's fine. With the guitar I ordered, I get Tele-like tones in a modernist design at a rock bottom price I couldn't refuse.

Yes, I broke personal rules to order the guitar I did. The design of it along with the really low price really made a lot of sense to me. Will it be any good? I have no idea. Maybe it will be good, or it may be terrible to the point where I just return it. You'll have to check back here later on to find out what I decide to do with it once received.