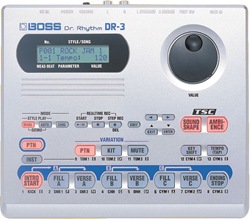 By next week (or late this week if it arrives early), I'll be in possession of a used (at a really good price I might add) BOSS Dr. Rhythm DR-3. That's a drum machine. I bought it for two reasons. First, my old Ensoniq SQ-1 Plus workstation synthesizer, which is over 20 years old, is wearing out. Second, I can't stand composing anything on the computer.

There is a distinct difference between recording and composing.

Concerning recording, my first mulitrack machine was the 100% mechanical cassette-based Tascam 424 (as in the original first-generation 4-track which was light-gray colored and not the "MK" series which had a darker gray and had more tracks). Yep, we're talking linear recording here. I learned everything I needed to know about basic multitracking from my 424 days, and used it so much I wore it out and had to buy another one. When multitracking for the PC became available, yes I switched to that because it made complete sense and it was easier. As a recording device, the PC or Mac is top dog. No question about it.

When it comes to composing however, that's a different story.

Music arranging and sequencer software is not songwriter-friendly and never has been. From a DJ or producer point of view, sure, software is the only way to go. But I'm not looking to emulate a full studio environment here. All I want is a stupidly easy way to create drum tracks, and the DR-3 is it.

The DR-3 is built for one thing - drum patterns. That's it. That's all it does. It doesn't do anything else and it never will. It is a device made for a very specific purpose and is designed out of the box to be easy. As a songwriting tool, easy devices like the DR-3 allow me to write songs much faster.

I'm fully aware that producers see drum machines such as the DR-3 as "toys". But I see it as the fastest way to create drum tracks when I'm writing songs.

On a final note, non-musician/non-producer people (as in your average music listeners) do not care where the drums came from in a song as long as they're in time and sound good. The DR-3 can be made to sound amazing; I know this and I look forward to receiving it so I can kick my songwriting into high gear.