It's time for another look at this guitar.

When I originally bought my first Jazzmaster back in 2013, the guitar I tried just before that was the Jaguar...

...and it still annoyed me. 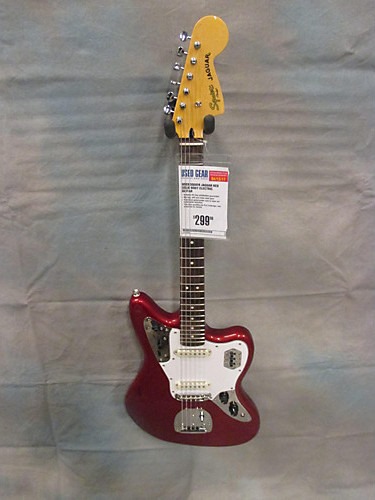 I don't have the guitar yet. It's en route from Maine to Florida. Being this is a used guitar and bought unplayed, it may be great or it may be total crap. I won't know that until I get the thing.

The price I paid was $344.25. This included tax and the standard (and stupid) Guitar Center store-to-store $21 shipping fee.

How much less this one was compared to outright buying a new one without the shipping fee? The answer is $83.74.

You might say, "Ha! I could have bought it for less from eBay!". Not for this one.

When you search eBay for Squier Jaguars, you can at the time I write this come across a Jag in the Vintage Modified configuration for $329 at lowest. Remember, I'm talking about VM configuration here. Not HH and not the bass. The VM.

The difference between what I paid and the lowest eBay price of $329 is just 15 bucks, meaning it was worth it to spend a little extra at the guitar store. If for whatever reason the guitar I receive is crap, I can get my money back with no problem at all, whereas with eBay there might be ship-back charges among other things.

Something else you'll notice is that out of the 4 finishes offered for this guitar, you'll see a lot of Sunburst and Surf Green VMs, then a smattering of Olympic White offerings, and then Candy Apple Red as the toughest to come by.

If I want a used Jag in Sunburst, sure, no problem. Amazon has those, as does eBay. But a used Jag in Candy Apple Red? Not easy to come by. And it's also becoming increasingly difficult to find a new Squier VM Jag in the CAR finish.

When I saw this guitar listed and then compared prices elsewhere, I had to go for it. These guitars are holding their value and it may be the last time I ever see a Squier VM Jag in CAR for under $350. Hopefully the guitar will be a good one when it gets here.

Why the change of heart on the Jag?

For a good long time I did not like the Jaguar, but my opinion on that has now changed.

Here's what I know better now compared to four years ago when I first started getting into Fender offset design guitars.

The Jag is the best short scale Fender body design

Four years ago, there were only 2 short scale guitars I tried out. The Squier VM Jag and the Squier Duo-Sonic.

Since that time I've played a Japan-made Fender KC-MG (Kurt Cobain) Mustang, Fender Mustang 90 and Fender Duo-Sonic. What I've come to know is that the Jag has the most comfortable body shape for a short scale electric. When I play it, it just has a very nice feel that the Mustang and Duo-Sonic does not have. This is not to say that the Mustang and Duo-Sonic are bad guitars (they're not), but where comfort is concerned, the Jag is the best of the lot.

My playing style has changed

Four years ago I was banging on strings really hard because I had been playing Strats for so long. I have a much lighter style of play now and even switched over to super-light 8 gauge string on the Jazzmaster.

My lighter style of play takes to the Jag quite nicely compared to the caveman way I used to play.

I have a better understanding of the short scale guitar

Short scale guitars do this thing that I call note warping. To be 100% truthful, any 6-string guitar with a scale length under 25.5" will exhibit that problem. Yes, that means all Les Pauls and SGs do it. The Epiphone Les Paul I owned before did it. You can even see in that linked video how ridiculously easy it was for me to bend notes just by bending the neck with hardly any pressure.

The point I'm making here is that I know what I'm getting into with a short scale electric. Fortunately with the Jag, it basically feels like the adult-size Jazzmaster, just with a shorter neck on it. I greatly prefer that over the Duo-Sonic, which has a design that puts the headstock way too close to me for my liking. The Jag, even while short, keeps proper distances, and I appreciate that.

I sat down with a Surf Green Jag and played it. A lot.

While at GC (I went to my local store to make the purchase of the used one), they did have a new Surf Green Squier VM Jag there. I sat down with that guitar, plugged it into a very cheap, very small beginner's Fender amp on purpose, and just played it.

Typical to pretty much every guitar at GC, this guitar was not set up right. The saddle heights were not correct and the truss rod needed a few small turns.

I noticed something immediately. This guitar did not annoy me anymore, and I enjoyed playing it even with messed up saddle heights and a misaligned truss rod. The guitar felt good.

Something else that surprised me is that the switchgear doesn't annoy me anymore either.

The Jag is not simple. Two knobs and three toggle switches in the lead circuit. There's a front pickup switch, a rear pickup switch and a mid-tone cut switch, affectionately known as the "strangle switch" because it gives the guitar a "nasal" sound when in use.

I used to hate, and I mean hate the toggle switches on the Jag. And you know what? A lot of other players hate the old-style toggles on the Jag too. That's why the Fender American Professional Jaguar has a single 4-way toggle on the bottom horn and a greatly simplified phase switch on the top horn (which only affects toggle switch selections 2 and 4).

However... when I was noodling around on the Jag with its old-style switching, this was the first time I ever remember not hating those toggle switches.

Did I like them? Well, I won't go so far as to say that. But I'm at a point now where they don't anger me anymore. I guess you could say that I've made peace with the Jag's lead circuit switching.

Does the Jag have something the Jazz doesn't?

Both guitars are insanely good for the surf "drip" sound. I mean, yeah, they're both great for other styles of music too, but for me it's all about whether the guitar can surf or not. It's a Jag, so obviously, it can.

The thing that really makes the Jag surf like nobody's business is combination of the slimmer pickups, the strange switch and the loose feel of the short scale neck. I've known for a long while that the Jag, even in Squier VM flavor, has the formula that really makes it work.

Where sound vs. sound is concerned, I can only describe a Jazzmaster tonal character as "sounds like a Jazzmaster". Similarly, the only way to describe the sound of a Jag is "sounds like a Jag". The Jazzmaster blares a bit more and has more midrange while the Jag doesn't blare as much and has more attack. Jazz and Jag owners know what I mean. If you've not played either guitar, all I can say is just go play them and you'll understand the tonal character differences better.

There is one thing the Jag does better than the Jazz. The Jag looks better, and only for one reason. The split pick guard. The metal areas for the rhythm circuit controls and lead circuit knobs and output jack just look cool. Even the toggle switches on the bottom horn somehow complement the look rather than look like just a poorly tacked-on afterthought. Yes, the metal areas are total fingerprint magnets, but that's just the way it is. Nothing a quick wipe with a paper towel can't cure.

In defense of the Jazzmaster's appearance however, it does have the better headstock logo. The "swish" trails look amazingly cool. But the Jag is more recognizable with its split pick guard because it's a larger area. You see a Jag and have that "Ooh! Shiny!" reaction because it does gleam more. With the CAR finish it especially gleams more because of the metallic flake present in the paint.

Buying used guitars unplayed is always a risk, but I was willing to take this risk because I wanted a short scale guitar, I wanted a Jag and I wanted it in red.

Hopefully this used Jag I bought will end up being a good one. Whatever happens, I'll be sure to document the experience here.