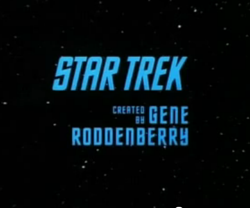 Oddly enough, I've never written a post exclusively about Star Trek, so I figured it's about time I did.

I have a confession to make. I liked ST:TNG a lot, but I hated ST:TOS for the longest time because I thought it was just stupid - and that's the one I'm going to talk about.

I decided to start watching this for two reasons. First, all the episodes are on Netflix, and second, it's a 1960s television show that doesn't outright suck.

The only things I really knew about the original 'Trek before watching it were the technical TV aspects of it. I do hold a college degree in TV & Radio Production and know quite a bit about television history. The entire reason everyone wears brightly colored uniforms on 'Trek was specifically to promote color television. It's the same reason sportscasters of the era wore very loud yellow jackets and had microphone socks that were oversized and in red, yellow, blue or green.

The television industry wanted people to buy color TVs to see the colors, and did everything they could to promote it, right down to what people wore. And it worked. Star Trek was no exception.

I've almost made it through season 1 of 'Trek, and I've learned on Netflix what you see is the remastered series. Any time you see an image of space, ship or planets, that's all CGI - but I have to admit it's very tastefully done.

This is one of those ultra-rare instances where I actually prefer the remastered over the original. The ship models used and the space scenes created back in the 60s for 'Trek were awful and this is a well known fact. The technology was primitive and the budget simply not there, so they had to make do with what they had. That being said, I have no problem at all watching the remastered version.

Only in very tiny instances did they throw CGI into the live action scenes, but I can tell whoever did the remastering was really careful about it. It's obvious that great care was taken not to tick off the fan base by "pulling a Lucas", so to speak.

I watch 'Trek for what it is - a 1960s sci-fi show. Since budget was at a minimum for effects, concentration was placed on making good stories. And for the most part they are.

The thing that strikes me most about 'Trek is the obvious 60s influence, because that's when the show was made. 1966 thru 1969 to be exact. That's before my time and it was a very different world back then. As cliché as this sounds, men were men, women were women, each knew their roles and everyone was okay with that. You also see several instances of the show taking potshots at hippie culture of the time and showing a resounding disapproval of it. Whether that was Gene Roddenberry's (the show's creator) idea or not I don't know.

Star Trek is just a quirky 1960s television show. Visionary to some, groundbreaking to others, but to me it's just good television. I feel for some reason that I owe it to myself to watch it through, so I'll do it. Yeah, there are some scenes that are just beyond stupid (like Kirk vs. Gorn), but with sci-fi sometimes you get that. It's okay, I can deal with it. 🙂