I got to get on the BTTF ride yesterday. It was the last day this ride was open and I had to go to ride it one more time. The line was freakin' huge and I waited longer than I care to admit - but it was worth it. Oh, yeah. Good stuff.

Here's me wearing my ultra-tacky (and oh-so-Florida) shirt. Note to the person who bought me this shirt - don't get ticked off at me, I love it because it's tacky. 🙂 I plan on dressing like this a lot more in the future. 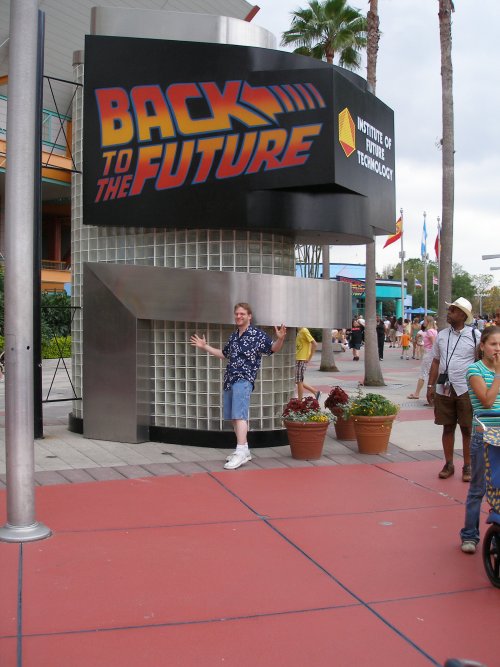 Note that's I'm still Connecticut-white. No noticable tan just yet. Workin' on that. 🙂

Right after the ride, it rained almost as if it were a sign that this ride closing was a sad event. And to be honest, it is. But like I said, at least I got to go one more time.

Interesting things that happened after the BTTF ride:

Ellen DeGeneres was filming an Ellen show at Universal that day.

For real. As my friend and I were walking out of the park in the rain, she was there was J-Lo and the crowd was going nuts and whatnot.

I had a two-part reaction to this.

Note to the masses. As I've been finding out, celebrities love Florida. You really don't have to go far to find one.

A wildfire broke out in the hills somewhere between Disney and Universal.

Just as I was leaving a crapload of fire trucks were approaching from I-4. Had no idea why, but I knew I had to get out of there fast before traffic turned ugly. I was able to escape most of it.

Later I found a wildfire had developed in the hills somewhere near Disney. Guess it was a natural occurring event. Don't know if it affected the Ellen show or not.

My first whiff of a true orange grove.

I programmed the GPS at one point to avoid the highway. I-4 was a mess, so I got off and went thru several towns I'd never been to. At one point near Lakeland I passed by an orange grove. I've passed by them before but not this close, and then... whoa.. orangey smell. Big time.

Doesn't sound too interesting, but I thought it was cool.

I will be posting the rest of my first Universal trip photos soon - because I'm not done yet. Thought I was? You were wrong. 🙂