The importance of getting while the getting is good 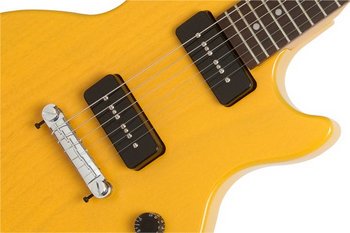 Recently I bought two guitars, the Fender Modern Player Stratocaster HSS and the Epiphone Les Paul Special I P90. Both guitars were selling for discounted prices when I bought them, and as of now they've both gone back up in price.

With the Fender, I bought that at a 6.25% discount over what it would ordinarily sell for. Not a lot, but it was money saved. Fender typically does not deep-discount their models, so you have to take what you can get.

With the Epiphone, that was a biggie as it was selling for almost 31% less than what it ordinarily sells for. For a new model that is insanely rare. And as it turns out it was a weekend-only sale at the time I bought it. The day I went to pick it up, the Guitar Center store I went to had just received them that morning. They had 6, with one 2 in the color I wanted, and I bought one of those 2. When I returned to the store a week or so later, 5 of the 6 were gone and the price had gone back up.

I got really lucky with the Epi, and there's no question about that.

With the Epi, those guitars flew off the racks. In fact, many of them were probably sold even before the store got a chance to take them out of the boxes they arrived in. The guitar was not listed as a weekend sale, but I'm sure the moment the first day's sales figures came in, the decision was made to make it only a 2-day thing so the stores could make more money.

With the Fender, that didn't sell as quickly (mainly because the price was a bit high to begin with even when discounted), so the discounted price stuck around until the end of 2012, and went back up when 2013 rolled around.

Concentrating on the Epi again, I knew the guitar would sell really fast just based on the discounted price of $89 alone, so I made the decision to go for it since it was actually in stock in the color I wanted at the GC I go to. With the Fender, I knew I had time, so I thought about that one more before I went for it. In both situations I got the discount I wanted.

The way to find cool deep-discount guitars like this is not some guarded secret. What you have to do is look at new listings often - online. What guitar companies typically do when releasing a new or updated model is to first offer it at a discount to see how many people buy it to gauge consumer interest in the instrument. If it's good, the price goes back up quickly. If not, the discounted price sticks around for a little while.

Online is pretty much the only way to do this - unless you're looking for used gear. With used, you have to go to the store because those axes are the last thing to be put as searchable guitars online since the store considers them a low priority (new stock is always preferable to move over used).

I don't have magic powers in my ability to find deep-discounted guitars. I just check the listings often. 🙂