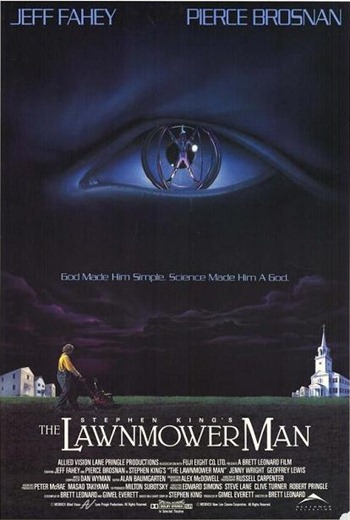 The Lawnmower Man is a 1992 movie which unfortunately has not aged well. This is one of the "cyber" sci-fi movies of the 1990s, and the idea of what 'the computer world' was back then does not translate well now.

If I remember correctly, the reason I rented this movie is because Stephen King's name is on it. If you look at the movie poster at right, it does say "Stephen King's The Lawnmower Man".

But does the movie have anything to do with King's The Lawnmower Man short story from 1975? Barely. King in fact sued the producers of the film for attaching his name to it, stating that the film had "virtually nothing to do" with his original short story. Did he win the lawsuit? Yes, but it took him two years to do it. The studio had to cough up 2½ million in damages.

Anyway, the point is that if you were expecting The Lawnmower Man to be any good because of a King storyline, you'll be sorely disappointed as it's nothing but 1990s-flavor Hollywood sci-fi schlock.

Back when I watched this movie in the 90s, I loved it and thought it was really cool. When I tried watching it again recently, I couldn't even get halfway through the film.

Just about every 5 minutes I was wincing at Hollywood's idea of what "high tech" was. Here are two examples:

Almost every time the lead character does something on the computer, it talks to him. When he records a journal for example, the computer says "journal started" or something like that. And of course the computer's voice is a monotone female.

The "secret lab" the lead character works in has the worst lighting imaginable. Dark, subdued, cool blue lighting is all you ever see, what you see of it. Scientists in this movie never have to see what they're working on, apparently. And to note, this same crap is still practiced today in modern TV cop dramas. CSI in particular is notorious for this. The lab is ALWAYS dark. Yes, the one place where bright light is needed more than anywhere else, and it's dark - but it looks cool! Yeah, that's just ducky.

I got 47 minutes into the flick, could not stand the schlock any further and had to turn it off. Being I know a fair amount about computers now compared to the early 90s, what the movie tries to pass off as usable high tech is a complete joke now - almost as much as Bad Guy Brimley's fax machine. And heck, even if I didn't know jack squat about computers, I'd still think the tech is a joke in The Lawnmower Man.

Aside from the tech crapola, is the movie any good? Not really. Although you can follow along with what's going on easily - which is a plus - there's way too much filler and not enough story, so things are dragged out just to fill screen time.

I turned off the movie right before the movie goes into total CGI mode, where is where all the budget went; I know from that point forward it's not a film but basically a cartoon until the end.

Maybe someday when I'm in the mood for cartoony film CGI of the early 90s, I'll watch the rest of the movie.