The quest for the right day-date watch continues 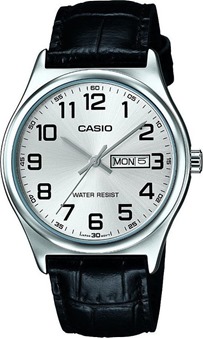 You would not believe the crapola I've been through in trying to find an analog wristwatch I can get along with. This is the latest on my search.

Recently, I bought a Casio F-91W. Two of them, actually. (I liked it so much I bought a second as a backup shortly after buying the first, since it was cheap enough to do.)

Something I've come to learn from wearing the F-91W is that I really, really like a watch that tells me the day of the month and what day or the week it is in addition to the time. I'd like to have that in an analog, and the watch pictured above (which I'll talk about in a moment) is on order and my latest attempt to find one I actually like.

It is true that many, many guitar players have small wrists. I think my wrist is about 6.75 inches around on the left wrist. Maybe slightly larger. I am left-handed but the left wrist is in fact the traditional watch wearer's wrist for right-handed folk. In comparison, the "standard" men's size wrist is usually between 7 to 7.25-inch.

You don't have to look far to find guitar players with really "bony" wrists. The hands and wrists obviously get a good workout fairly often, so seeing a guitar player with skinny little wrists isn't uncommon. This is not to say that all guitar players have skinny wrists, but many do.

What I've learned so far

Another one I tried in Walmart was the Casio MRW-200H. That is a day-date, and believe it or not, the bezel actually turns like a proper diver's watch should. What I didn't like about that one however was the strap. Too long. True, I could have cut it to size myself since it is resin, but ultimately I passed on this because I wanted an analog that would go nicely with a button-down shirt. I will give the MRW-200H credit however in that it felt quite solid, meaning it feels more expensive than its price.

Yet another I bought and had to send back was the Casio MTP-1370. That watch was so frickin' close to being the right one, but it had two problems. First, the hands were absolutely unreadable even with the slightest glare, and second, I could not get used to a watch with no numbers on the face. Some guys can read watches with no numbers easily, but not me. It's not that I can't read a watch without numbers on the face (I could tell time with a Movado watch if I had to, as many of those have almost no hour nor minute markers at all,) but I just have to look at it longer to figure it out. That's annoying.

When shopping for an analog watch that just tells time or has basic time and date, there are plenty under $50 that look nice.

All the Timex brand options are out because they all tick too loud. That's a Timex thing. I wish it wasn't, because otherwise there are actually several day-date models they make that I would buy in heartbeat.

I have searched, searched, and searched again to find an analog that will suit. In the end, Casio is pretty much the only brand that makes an analog day-date that is affordable and isn't giant-sized...

The V003 is not a watch I could find at Walmart, so it had to be yet another one of those buy-it-to-try-it things.

I do not know if the V003 will have the same sun glare problem the 1370 did. I am also hoping there is enough contrast between the hands and the dial.

...nobody does a smaller easy-read day-date better than Seiko. 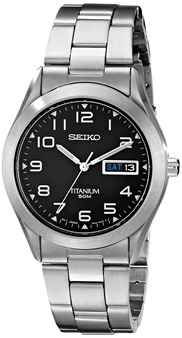 I don't have $100 to blow on a watch, but if I did, the SGG711 is what I consider to be a perfect day-date. It's easy to read, it's lightweight thanks to the use of titanium, the hands are just the right thickness, and there's plenty of contrast between the hands and the dial.

Some listings state the case diameter is 37.5mm while others state it's 37mm. And that would fit my wrist just fine...

While the Casio V003 doesn't look anywhere near as good as the Seiko does, I'll be happy if the V003 actually fits and functions correctly. That will be a step in the right direction.

If the V003 works out and I keep it, does that mean I'll stop wearing the F-91W? Heck no. It just means I'll have an analog day-date watch that I can finally feel comfortable wearing. Sometimes it's just nice to wear an analog watch on the wrist, what can I say.