this was the city 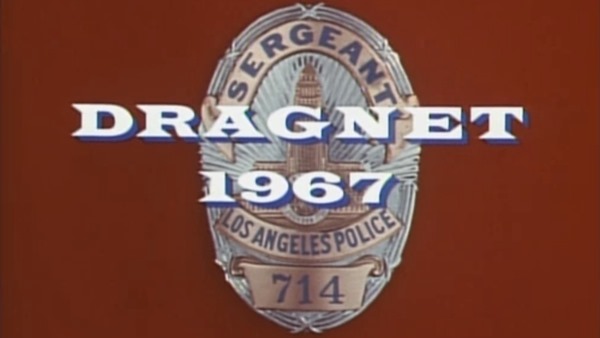 The 1967 version is the best of the lot, no question. It's on Netflix right now and I have been watching it.

There are others who have pretty much picked the show apart to a degree I didn't think was possible. (That linked blog by the way is awesome.) So my take on Dragnet will just be on how the show relates to me personally.

I was born in the mid-1970s, so the show was before my time, but the way life was shown in Dragnet wasn't all that far removed from how I lived as a kid in the late 70s and early 80s.

The same General Electric rotary desk phones used in the show is what I used as a kid when I wanted to place a telephone call to someone. And a lot of the industrial landscape of LA pretty much looked the same as it did in New England during my childhood.

In Dragnet driving shots through certain areas, you see tons of signs and utility poles, and I totally remember when pretty much all towns used to look like that, even in New England where I grew up.

Back in the day, there were very few restrictions as to how a business could promote itself. Pretty much anyone could just throw up a sign on a steel post and have it be as short or tall as they liked. The end result in highly populated areas was this mishmash of signs everywhere of every color, combined with a sea of utility poles (many of them quite rickety) with wires hanging everywhere and a ton of road signs fighting for attention along with it. This was an absolutely and totally chaotic look that created a style all its own. That look mostly disappeared once more laws were written for what a business could and couldn't do for signage. That, and many utility poles were replaced with underground wire or the grid was rewired in a way where not as many poles were needed.

I've never been to LA and have no real desire to go there. I know that the city depicted in Dragnet is absolutely nothing like it is today. Nobody knew in the 60s what would happen in the early 90s there or this year for that matter.

I know that not all of LA is bad. To classify all of LA as "bad" would be the same like classifying all of Tampa Bay Florida where I live now as "bad" when it isn't. Does the Tampa/St. Pete/Clearwater region have its crappy parts? Of course it does. So does LA. You get that with any city no matter where you go.

Dragnet, to me, is a time capsule in the form of a television show. It's written by Hollywood scriptwriters of course, but police dramas in particular do have to base a lot of what they write from real-world events of the time to make it believable. And yeah, Dragnet does capture the essence of what late-60s American life was like. I'm not saying it's 100% true (even though they said it was at the beginning of every episode), but it's a fun watch. I dig it.

This is the first episode from '67 with the infamous "Blueboy". Watch it now before YouTube takes it down. It's a ridiculous season opener and you'll find out why when you watch it. The ridiculousness of the story is what makes it fun to watch.

Catch the rest on Netflix if you can.