On becoming a watch wearer 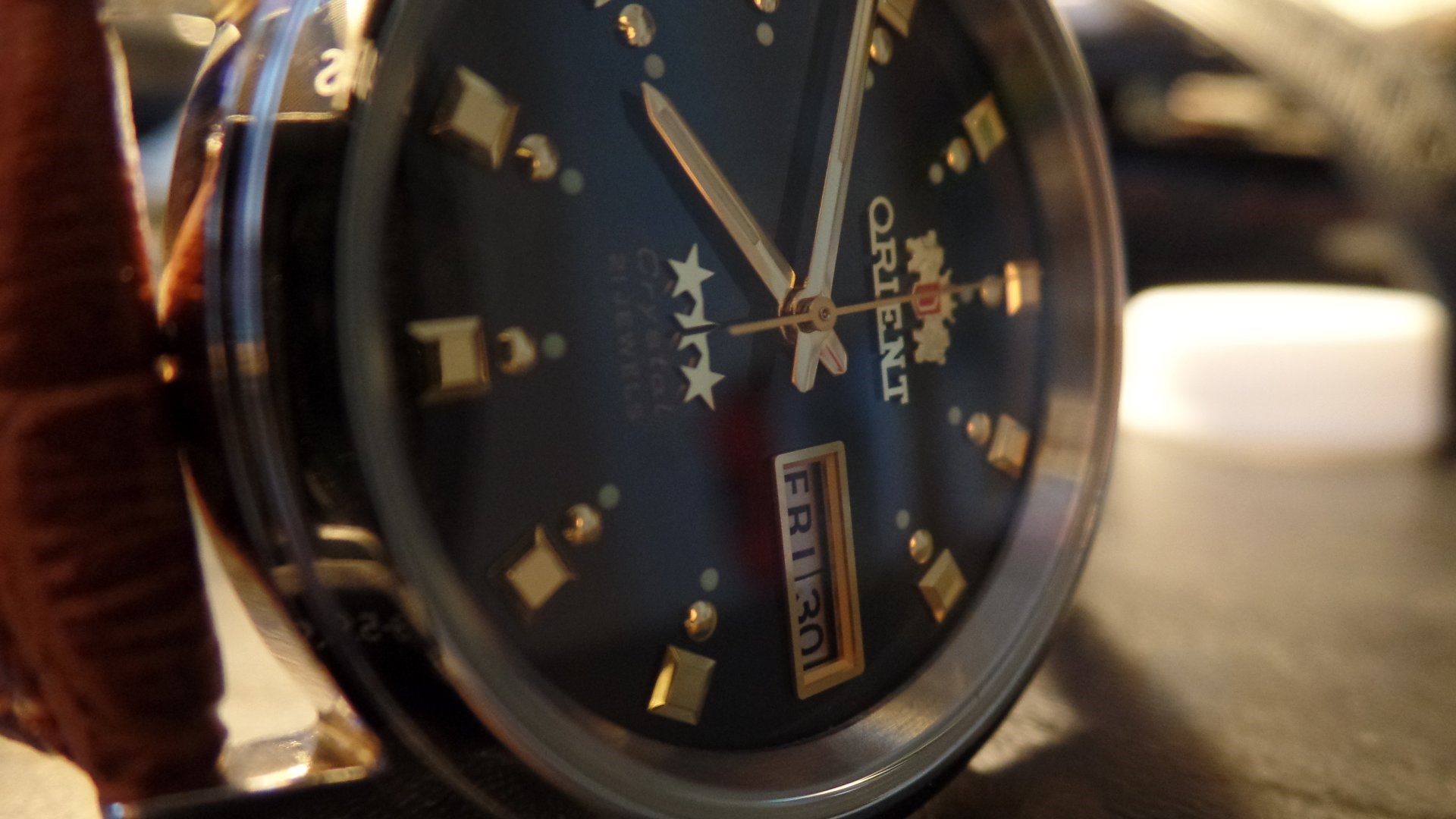 I almost put the title of this as On becoming a watch wearer again, but then realized that as a kid, I didn't wear watches much.

2016 is quickly coming to an end, and although I had started wearing watches beforehand, this was the year where I really started getting into it.

I own a collection of mostly digital Casio wristwatches (including a new CA-53 that's currently in the mail on its way to me) and a few analog timepieces, one of which is the Orient Three Star (a.k.a. Tristar) seen above. My Orient now has a leather strap with deployment clasp on it because I prefer it over the original stainless steel bracelet.

What I've learned from becoming a watch wearer

Time alone is not enough

Only 1 watch I own, the Timex Weekender, is a time-only watch. Every other timepiece I have shows either the day of the month, or month/day and weekday all at once.

Wearing a watch that only shows the time annoys me. Had I known this, I never would have bought the Weekender. And yes, I do have legitimate use for a date function. As I've mentioned before, there was a time I was in the grocery store where I needed to check an expiration date on a food item, looked to my wrist, and was met with disappointment as I was wearing the Weekender that day.

Needless to say, the Weekender has been put back in its box...

...although I may buy a Timex Weekender Chrono 40 in the future as that does have a date feature at the 4 o'clock position. The dial is a bit busy but I like the style of it.

Lightest in weight, easiest to clean and scratches nothing. Cheap resin straps may not score points for style, but where utility is concerned there's nothing better.

Analog looks better, but digital is best for utility

When I want to show sophistication, I wear an analog. When I want alarm reminders, a timer for cooking use and so on, I wear a digital.

I tried the analog-digital thing once but it didn't work out. Better to just keep analog and digital separate as they each have their place.

I am unintentionally more aware of the "space of time"

This is a weird one to explain but I'll give it a try.

I will glance at my watch when waiting in line at a checkout, or at a stop light, or in pretty much any instance where I'm waiting just to have something to do.

What this has unintentionally done is train my brain to be more aware of how long things take.

I now know that waiting five minutes in a grocery store checkout line, which feels like forever, is only five minutes.

I now know that what feels like a 15-minute drive somewhere is actually 25 to 30 minutes.

I now know that it's pretty much required for me to have a timer in the kitchen to consistently cook my food correctly, because I really can't gauge cooking time that well otherwise.

You get the idea.

The single largest benefit of being more aware of the space of time is less stress. Understanding time better gives one more control over their lives. And having that control gives a better sense of order to things.

I am totally okay with sometimes wearing nerdy/geeky/dorky watches

Obviously, I don't have a problem wearing the geeky stuff as I sometimes don my Casio F-91W and soon-to-be CA-53 as mentioned above.

Some universal truths about geeky watches

Geeky watches always get noticed more for the reason so many more people own them. As in, "Hey, I have (or had) that watch too!" If you want to wear something that's totally a conversation starter, you really can't go wrong with a cheap, classic plastic Casio watch.

Geeky watches really aren't geeky anymore, provided you have the right one. And it's this point I'll talk about most and end with.

Something that brought back cheap digitals in style was in fact the smartwatch. Smartwatch programmers started offering Casio design downloadable faces for the touchscreens. And sure enough, people download these replica screens and use them often...

...but you can just as easily use the real thing.

There are replica faces for both the F-91W and the CA-53W for use on a smartwatch. And heck, even a replica of the AE1000 face is out there, and that's a newer Casio model.

I may own a smartwatch someday, but probably not anytime soon. I'll stick to the real Casio timepieces. They're cheaper and last a lot longer.

I'm not saying geeky digitals will ever truly be more fashionable than luxury timepieces are. But I am saying the geeky digitals are far less geeky than they used to be.