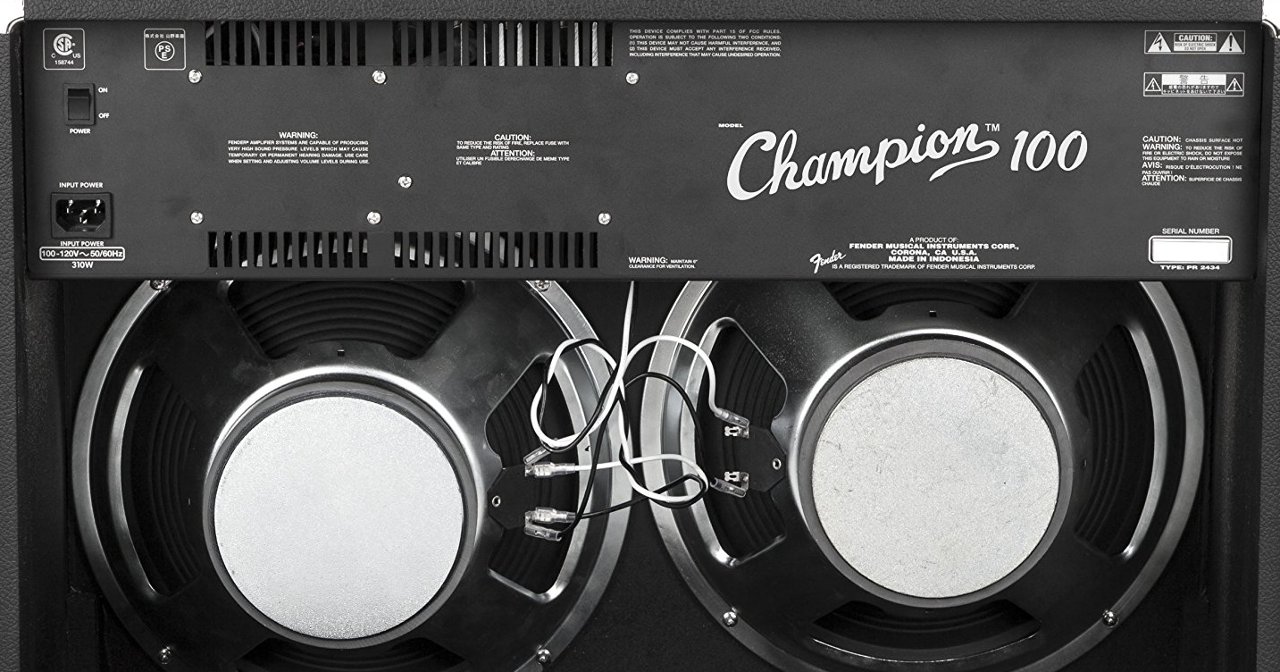 This one is written by request.

I'm just curious how many watts do I need for small gigs and band rehearsals? And cheap because I'm just starting out.

Pictured above is one of the more affordable solid-state amplifiers, the Fender Champion 100. Very loud. This thing has twin 12-inch loudspeakers, and oh yes, it can push a lot of volume. It is easily as loud as most half-stack amplifier setups. It's also weighs 40 pounds (18kg) so it's not exactly a lightweight. This is a beefy amp.

Do you need 100 watts? In my experience, no. With solid-state you can get away with 60 and still be heard, but for anything lower than that, you end up with solid-state distortion - which is a sound you absolutely do not want.

I personally use a Line 6 Spider V 60. Previously I had a 100-watt Fender Frontman 212R, the predecessor to the Champion 100. The big Fender for me was just too big, too darned loud, and very annoying to lug around. The Line 6, while having only one loudspeaker and being 60-watt compared to 100-watt, suits me better.

Then again, for regular gigging it is better to have too much volume available rather than too little. There would never be a problem getting enough volume out of the big Fender. But with the smaller Line 6 60-watt, there might be.

Not as many watts are needed for tube-type to push volume compared to solid-state, but to explain why that is requires a whole other article that I'll write later. For now, I'll just say I don't recommend tube-type for those starting out for one reason. Cost.

An example of this is the Fender Super Champ X2. Great tube-type amp? Yes. But at the time I write this, it's $50 more than the Champion 100 and not even half as loud. There is absolutely no way the 1x10 Super Champ will out-loud the solid-state 2x12 Champion. Not a chance. You want the most volume for the money, you get the Champion amp.

And then when you see the price of the Spider V 60, that's when you really start seeing the value of solid-state over tubes. Tube-type amps just can't compete pricewise when compared to solid-state.

Generally speaking, tubes always cost more than solid-state does and that's pretty much the way it's always been.

Given the fact new solid-state amps are so low in cost these days, you really don't save much buying used.

Granted, if you do come across an a solid-state amp with 60 watts or greater that's in good shape for real cheap, as in under $125 cheap, you can take a risk and buy one of those. But I wouldn't personally do it.

How many watts needed for certain gigs?

How many watts to go with depends on the rehearsal or gigging space.

For smaller rooms where sound can bounce off the walls, 60 watts is usually just fine.

For larger rooms, the amp may need to be lifted off the ground (such as stacking it on top of a box) for it to be heard, and you should be able to get away with 60 watts.

For larger rooms with wider open stages or outdoor gigs, at that point you need larger loudspeakers that can push more air, so 100 watts would be needed...

...if a drummer is present.

Fighting with the drummer

The one person you're fighting against for sonic space is always the drummer.

But with the full band, it's the drummer that's the loudest thing in the room. Always. That's the guy you need to out-loud to be heard. If you have a drummer that really bangs the skins hard, you'll need to go for the 100-watt amp.