What does "student guitar" mean?

Sometimes you will see a guitar labeled as being "student." What does that mean?

The above guitar, a Squier Bullet Strat, is a "student" guitar; there are two reasons why it is labeled as such.

Where did student-size electric guitars start?

While there have been many guitar makers that have offered student-size electrics, the company best known for it is Fender.

As the electric guitar exploded in popularity in the 1950s and on into the 1960s, Fender decided to offer a few electric models that were smaller, purposely priced cheaper and had only the simplest electronics.

An example of this is the Fender Music Master: 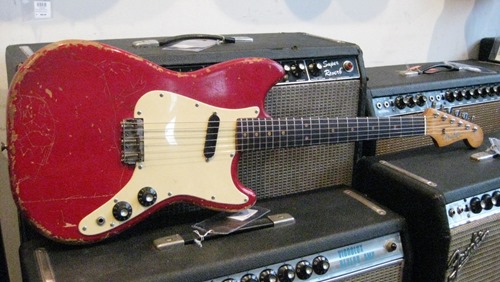 The Music Master was a dirt simple 3/4 scale guitar. Some came with two pickups, but many just had one. Scale lengths came in short scale 24.0-inch or really short 22.5-inch.

These were marketed as beginner guitars. Small, cheap and affordable.

Is the Music Master just a simpler version of a Mustang?

Basically, yes. The Mustang (still available new today in Squier and in Fender flavors,) has a split pick guard with metal covering for the knob controls and a vibrato system, while the Music Master had just a single-piece guard and no vibrato system.

Were there ever 22.5-inch scale Mustangs?

Yes. Fender did make a handful of Mustangs with the super-short 22.5-inch scale, although I personally wouldn't own one because that's very itty-bitty.

How does student size relate to a Stratocaster shape?

This is where things get interesting.

A student-size Stratocaster shape guitar is not 3/4 size, but rather 7/8 size.

In plain English, that means the body and only the body is slightly slimmer.

As far as I'm aware, all Squier Stratocaster guitars have a 7/8 body, and this is the primary reason why tremolo blocks from an full-size Strat bridge system will not fit correctly and stick out from the back of the body.

The neck however is almost exactly the same size as an full-size Strat. Same 9.5-inch fingerboard radius, same modern C shape, same 25.5-inch scale length. The only thing that's truly smaller is the nut width (only when compared to USA Strats, since Squier Vintage Modified and Mexico-made Fender Strats have the same nut width.)

Only in the respect that they're low-priced.

Today's student guitars don't follow the original 3/4 sizing that the Music Master did. In addition, you get the same full electronics capability that the full-size Strats do, whereas originally you didn't.

What is a "true" student-size guitar?

The Squier Mini. That guitar has a 22.75-inch scale length and is "hardtail" (no vibrato system.) That's a small guitar made for people with short arms and small hands.

So yes, Fender still does make a true student-sized guitar. It just happens to be a Squier brand in a Strat shape instead of the Mustang shape, and simply labeled as Mini, as in miniature.

The Squier Mini is a true kid's guitar. But something like the Squier Vintage Modified Stratocaster? That's an adult-size guitar.

To say a 7/8 body is "for kids" is like saying 17-inch wheels on a car are "training wheels" compared to 18-inch when they're obviously not.

This is something I mentioned before but will bring it up again.

If a guitarist has been playing Squier Strats for a while, then "upgrades" to a Fender Strat, there is the very likely possibility he or she will hate the feel of the full-size Strat body.

It's not that the full-size body will weigh significantly more than the 7/8, but the added thickness can be uncomfortable.

In seated position, if you notice a full-size Strat profile "digs" into your body more, or if when playing standing the body seems to slide around more in a way that just doesn't feel right, chances are you actually like the 7/8 size better simply because that's what you're used to.

Guitar players that discover they prefer the 7/8 size Strat body are both delighted and disgusted at the same time.

The delight comes from the fact that their preferred body shape is from a brand that's very affordable.

The disgust comes from the fact they know there is no Fender Strat that exists they will ever be able to truly enjoy - unless they spend major cash on a Fender Custom Shop build and specifically instruct the shop to use a 7/8 body shape and fabricate a custom short tremolo block that will fit in it.

This begs the question: Should Fender build a 7/8 size Strat?

I think they should. Not an American nor a Mexico model, but a China-made model. There are already China-made full-size Fender Strats like the Modern Player Series (and yes, that is absolutely a full-size Strat.) I don't think it would be too difficult to introduce a Fender-branded 7/8-size Strat. Just call it the Stratocaster "S" model, with S meaning slim or student.

I figure it like this. If Fender made a 7/8 Strat that's Fender-branded, it should be marketed as a "high-end student guitar" of sorts. All the good Fender bits and bobs, just in a slightly smaller body size with low pricing. A China-made Strat in that flavor would fit the bill quite nicely. Have it as a street price of around $350 to $375 (slightly below Modern Player) and it would be a winner and sell well. I'm sure of it.