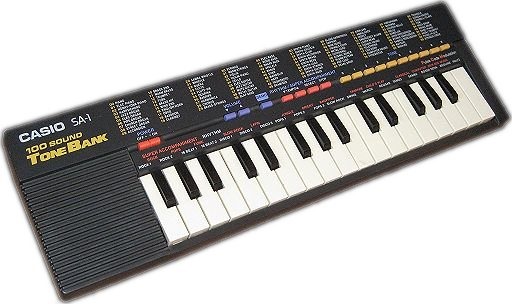 Above is what I believe is the first ever SA model of Casio synthesizer, the SA-1. The SA series have always had 100 sounds in them. Over the years there have been many SA models released of varying colors, shapes and sizes.

My journey with synths has pretty much gone down the same route as with guitars. I started basic, then went "pro" level, then realized most of the "pro" stuff is junk, then back to basic again.

There are a few things I know to be true about synths.

Any synth can sound good with external effects applied to it

It is possible to get what's known as the "Vangelis sound" (as in the synth sounds from Blade Runner) out of a cheap Casio if you apply the right effects to one. No, it won't sound exactly like Vangelis, but the point is that with the right effects you can get fairly close to it.

The fact of the matter is that most synths, much like guitars, sound pretty crappy with no effects applied. And if a synth has internal effects, they're usually awful.

Take the absolute crappiest you know of (or said more correctly, what you think is the most crappiest), and then plug it into a DD-7. Listen to how awesome it gets just by adding that one effect. Night and day difference.

If you wanted a synth that has awesome internal effects, that would be the newer Korg SV-1, as that thing has a fantastic delay in it and a real-deal tube for natural overdrive (yes, really). But it'll cost you well over a grand to get it. Going with a DD7 for delay and a "warm"-style overdrive like the Dyna Drive is a much cheaper alternative. 🙂

A modern version (even though discontinued in 2010) of the absolute king-of-the-heap in the world of pro-grade analog synthesizers is the Alesis Andromeda A6. It's a beast. A very expensive beast. It is true analog in every sense of the term and can be tweaked to an insane level. You could call the A6 a "Moog killer" and be 100% correct...

...but good luck figuring one out because it's annoying to program. The A6 is one of those beasts that has every possible option you could think of because it's got some serious teeth. But it also has a seriously wide learning curve to it.

Let's compare this with a totally different (and digital) synth from 1985, the Korg DW-6000. The 6000 is really easy to figure out. Here's a video from a guy who did up a song with one with - surprise, surprise - the addition of a BOSS RV-5 reverb pedal effect. Check out how great this sounds:

My only complaint about the DW-6000 is its size. Small for what it is (and light), but still a bit bulky.

If size were not a consideration for me, I would seriously consider picking up one of those 1980s digital DW Korgs, because not only are they dirt cheap but also easy to repair. Usually, the only thing wrong with them is a few solder connections on the inside that get knocked loose. Easy fix.

What most guitar players want is a keyboard with good strings, waves and bass

There's a lot of guitar players who would like to put synth in their songs but hardly know anything about keyboards other than just the beginner-level basics. And they have an idea of what synth sounds they want but don't know what they're called.

Fortunately, this is really easy to figure out because it's four things. Strings, waves, bass, pads. And the pads are optional.

What does a pad sound like? Check out the DW-6000 video above. The first sound you hear is a synth pad.

Pad when talking about synth tones literally means "a padded sound", as in a sound "softened" on either end.

The little SA-46 I'll receive later this week I know for a fact has the first three listed above, and might even had a pad sound or two in its strings tones as it does have 10 of them.

In other words, guitar players usually want anything but a piano sound out of a synth. They want a synth that sounds, well, synthy. 🙂 And when you add in an effect or two to that synth, hell yeah it sounds awesome.

It's really easy for a synth guy to get caught up in all that "pro" gear snobby nonsense just like guitar guys do, and there's no need to do that.

Fortunately, it's like I said, any synth can sound better with the right effects applied. If you play guitar (and you most likely do if you read by blog), just take your exiting guitar effects and run a cheap synth through them instead of the guitar. You'll get a good sound out of it.

I've seen Casio and Yamaha keyboards on Craigslist for as little as 25 bucks. These things are everywhere, so go get one. I personally went new with the SA-46 because I like small keyboards and it's tough to find those on Craigslist (nobody ever really thinks to sell them there).