Why is guitar intonation so important? 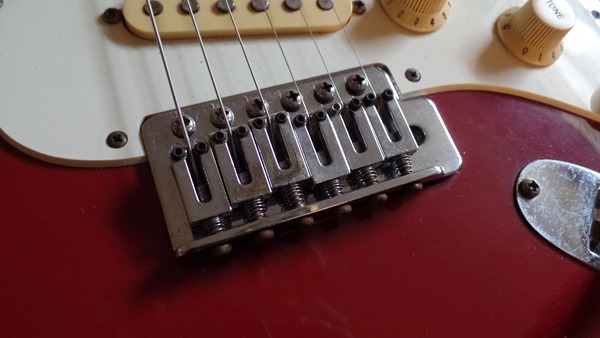 Guitar intonation can be the deciding factor not only when buying a guitar from the guitar store, but also be the thing that makes you fall in or out of love with a guitar you already own.

Above is a photo of my first guitar (I still own it,) my '89 Squier II Stratocaster. Yeah, it's 27 years old now. I specifically took a photo of the bridge because you can guess with fair accuracy whether a guitar is intonated correctly just from looking at the string saddles alone.

If you look at the above photo, the saddles from left to right look like two sets of stairs. That is the pattern of a properly intonated electric. It is not a Fender nor a Gibson thing. It's an electric guitar thing. When you see the saddles, be they Fender-style bent steel, Fender-style block, Gibson-style wedges/knife edges or whatever it is, if they appear to be in the pattern of two sets of stairs with an incline of left-to-right, chances are pretty good the guitar is properly intonated.

Why is it important to know this?

If you go to any guitar store and examine Fender vs. Squier, or to be more specific, American (meaning not Mexico) Fender vs. Squier, it's usually true that all the USA Fenders are intonated correctly and NONE of the Squiers are.

This automatically means the Fender will sound better just for the fact chords will be more in tune when the strings are tuned to pitch. The Squier on the other hand will sound "slightly out" until the intonation has been set properly, as will any other low-cost guitar.

This is what I usually see in the guitar store: 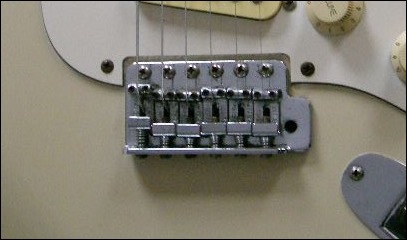 The above is a guitar is guaranteed to sound terrible because it's not intonated properly at all. Whoever owned this literally intonated it backwards, and for some strange reason the 6/E string is pushed out further than all the other saddles.

This is not exclusive to used guitars, as this happens on new models too. And not just the cheap new models, either. I've also unfortunately seen my fair share of new Fender Mexico electrics where the saddles were never adjusted for proper intonation. One time I picked up a new-model '70s Stratocaster at a guitar store, and noticed the 1/E saddle intonation screw was almost falling out because it was so loose. The Fender Mexico factory actually delivered the guitar like that, because nobody at the guitar store would purposely set a screw that loose. Bear in mind the '70s Strat sells for over $800 new.

If you're asking yourself the question, "Does this mean part of the cost for an American Fender is just to actually have a guitar delivered that's set up right?"

On guitar brands other than Fender, you will sometimes see a sticker or hangtag that states "SET UP IN USA." That doesn't mean the guitar was constructed in America, but it was set up by a USA guitar tech before being delivered to the store. I guarantee that guitar will play and sound properly no matter what the price tag says, even if it's just a $299 instrument. Why? Because a proper setup makes that much of a difference.

Should you even bother trying out a guitar that hasn't been intonated?

Yes, because you may really like the guitar even if chords sound bad due to slight off-notes due to intonation not being set.

All you basically need to know is how to spot bad intonation before picking the guitar up so you know what to expect.

When should you re-intonate a guitar you already have?

...you should not have to re-intonate.

This is not to say that you only need to intonate a guitar you own once, just once and never again. There will come a point when you will need to re-intonate it, even if only for small adjustments.

A guitar you own that "falls out" of intonation is one you will quickly grow to hate. While it won't sound bad, having an instrument sound slightly out-of-tune even when the strings are in tune will drive you nuts - even so much to the point where you won't even want to play it anymore.

For those of you that need a specific time reference, if the setup on your guitar hasn't changed (including string size choice,) the general rule of thumb is to check the intonation once a year.

What can fix intonation problems?

Replacement tuners. This actually fixes tuning and not intonation issues, but can be perceived by the player (you) as intonation issues. Having tuners with proper grip is obviously important.

Replacement string saddles. The replacement saddle itself isn't the cure for intonation here but rather the intonation set screw. If you've got an old string saddle or two that rattles out of place, outright replacing the saddle with new set screw cures that easily. If you find a loose set screw but don't want to replace the entire saddle, teflon thread seal tape works. Yes, the same stuff you use when installing a shower head. It's thin and light enough to be applied to a set screw and work. It also cures screw rattles very neatly as well. However, it's not a permanent solution. The tape will eventually fail. But until you get replacement saddles, it works fine for a temporary solution.

Rich buys a 2012 Fender Modern Player Stratocaster HSS (with extra info)
For the second time in my life, I have bought a Fender guitar. Okay, well that's not entirely accurate. The first true Fender Stratocaster I ever owned was bought for me by my father in 1993 USA Standard for an 18th birthday present. I still own that guitar but it has a busted neck that […]

Replacement tremolo block options for the Squier Bullet Strat
This part should be easy to get, right?

Fender Deluxe Roadhouse Stratocaster review
There's some nice technical wizardry going on with this Strat, but is that enough for this model to be truly "Deluxe?" Let's find out.