Why you should still use DVDs to back up your stuff 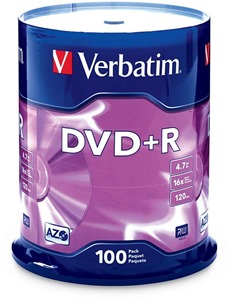 A bit of a nerdy article to start off this week, but it is important you know this stuff.

Above is a 100-disc spindle of Verbatim DVD+R blank discs. Don't get the -R. There is a difference between the two, and a pretty big one at that. The +R is a multi-layer disc and the -R a single-layer. If making a DVD movie for a console player, DVD-R works best there. But for regular computer data, DVD+R is the only way to go.

Why use DVDs to back up your stuff?

There are basically two reasons.

The second reason is something nobody ever talks about but is really important. Once you write data to a DVD, it cannot be overwritten. When a DVD is written to, you can't accidentally format it again, nor can you accidentally delete or overwrite files. When you format a disc and write data to it, it's permanent...

...and that is a very good thing. It's almost like a built-in insurance policy of sorts, because you can't delete files off the disc or even move them. The permanence of the written data is a nice comfort zone.

Once your discs are written to and finalized, all you have to do is just store them in a jewel case or cheap binder, put that binder in a cool, dry place and pretty much forget about it until you need the discs again to pull a backup, should you need to.

What is the best file format to back up your stuff?

This is where I work the musician angle in here, because I've learned about what I'm about to tell you the hard way.

If you record music or make videos, you know that the best formats are the uncompressed style. With a Windows PC, that means WAV audio and AVI video files. These files get big, and the problem with writing big files to backup is that they can get corrupted while being written to media.

The way to prevent this from happening is stupidly easy. Put the file in an archive container first.

How do you create an archive? 7-Zip. Or if you want a program that's fancier with more options, PeaZip. Both are free. But no matter which you use, I strongly suggest using nothing but the 7z archive format. Why? Because it's better than regular ZIP.

ImgBurn. It's free. If you've never used that software, it can be slightly intimidating at first just because it has a lot of options. And yes, it's a little old as it is 2013 software, but it's damned good software.

While true Windows on its own can burn discs with no need to use burner software, I still use ImgBurn anyway because it does certain things better. Try it out and you'll understand what I mean.

How long does a DVD last?

That depends on the quality of media you buy. Generally speaking, Verbatim is the go-to brand.

If you want to spend extra and want the best disc blank, Taiyo Yuden is what you want. Read the reviews on any of the listings you see on that link and you'll know why.

Assuming for the moment you buy proper Verbatim or Taiyo Yuden discs, and store them properly in a jewel case or binder, and keep those jewel cases or binder(s) in a cool, dry environment, and use an optical drive that's in good working order, you can expect a minimum of 7 to 10 years out of a disc before read failures start happening.

However, it has been known for some discs to last well beyond that. There are some people out there who have discs they burned in the mid-1990s that still work today, and that was almost 20 years ago at the time I write this.

No, I'm not saying your discs will last 20 years. But when written to with proper working hardware and stored correctly, they should last for at least 10.

Should you buy an external DVD burner?

This actually is a pretty good idea.

Using a simple external burner that connects and is powered by a USB cable can be moved from computer to computer. If you're in the situation where you own multiple computers and one or more doesn't have an optical drive, yeah, you need an external burner.

Or, if you have an internal burner now, the external is nice to have as a backup optical drive. External burners are certainly cheap enough these days, so it's worth it to get one.

Why bother with DVDs when USB pendrives are so cheap now?

USB pendrives are cheap - but still not as cheap as DVDs are.

If for example you buy a 100-pack of discs, and that costs you $30 with shipping included, that translates to 30 cents per disc, and you can store all the discs in a binder. USB pendrives even at their absolute cheapest don't get anywhere near the price of a blank DVD.

True, the DVD holds 4.7GB while a dirt cheap USB pendrive holds 8GB, but the inconvenience of having a bunch of pendrives or memory cards scattered around in a box is just annoying.

Also remember it's a lot easier to grab a marker and write (as in write by hand) on a disc compared to a pendrive or memory card.

Why bother with DVDs when you can store everything online?

Sure, you can use Skydrive or Dropbox or whatever for free, but there is absolutely no guarantee whatsoever that any online data storage service will be online tomorrow - even if you pay for it.

In addition, storing things "in the cloud" is a bit of a trap. Over time, let's say you store a whole bunch of data out there, and now you have 25GB of your stuff in the cloud. Say you had to download all that. How long would that take? Probably a really long time, and some of the data would most likely arrive corrupted because of a transfer glitch, forcing you to download it all over again. Even if you have a ridiculously fast connection, that's annoying.

Storing stuff in the cloud sounds like a good idea at first, but it isn't. Storing too much stuff online is where you get into the trap, because if the time ever comes where you have to download it all, that will be a long, tedious task to complete.

Local media is still the best way to go about it, even if it means using cheap DVDs. On DVD disc, it would take 6 discs to store 25GB worth of data. And I absolutely guarantee you could copy all the data from 6 discs faster than you could download it from the internet.

Yeah, the DVD is old, but for the data you care about, it's still one of the best things going. Great for storing audio and video projects, photos, programs you download, documents and so on. All that stuff still fits on DVDs easily.