Would the Charvel Surfcaster be desirable as a new guitar today? 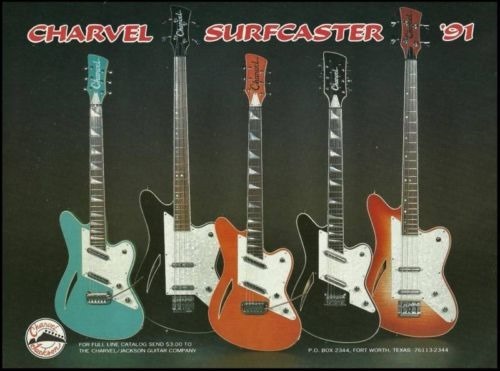 Ah, the 1990s. Kind of a weird time for guitars because it was a period where old was old and new was weird. And then Charvel comes out of seemingly nowhere with 1950s-inspired design.

The above image you see is from a 1991 guitar catalog, and yes, that was the first year the Surfcaster was made (which technically means the first model year was 1992.) Surfcaster was not a guitar made many moons ago that was reintroduced, especially considering Charvel guitars didn't even exist before 1974. It was a brand new design that had a lot of retro flavor going on with it. And bear in mind this was at a time well before there was even such a thing as a guitar being labeled "retro."

Original Surfcasters were made in Japan, and from day one was always considered a boutique instrument, hence the reason you basically never saw them in guitar stores.

This guitar had model years from 1992 all the way up to 2005. The traditional design has the two lipstick pickups in it, but some had 3 lipstick pickups and some had humbuckers. The rarest bird of the lineup is the bass, and I can totally understand why. Two lipstick pickups in a bass looked cool, but probably had a horrible tone to it. No bass player in his right mind would have given up his Fender Jazz Bass for a Charvel Surfcaster Bass.

Now you will notice in the magazine ad above that at bottom left is a logo with both the Charvel and Jackson brand names in it. Does this mean there are Jackson-branded Surfcasters out there? Yes. But the Jackson models weren't Japan-made and totally sucked, so the Charvel-branded model is definitely the better of the two.

Why was the Surfcaster discontinued even though it was a known boutique instrument? Fender did that. When they bought Charvel in the early 2000s, the Surfcaster was given the boot. As for why, that I don't know. Maybe it was the model name, maybe it was because it was too similar to other stuff Fender was selling, maybe some other reason. No idea.

This is where things get interesting.

When you have a specific guitar model that was built for over a decade, you don't just throw it away, because by that point there are manufacturing facilities in place that can churn out these guitars easily for sale.

Currently, Charvel has a guitar model called the Desolation, with a sub-model(?) called the Skatecaster, and looks like this:

There are several variants of the Skatecaster, such as Skatecaster 1, Skatecaster 2, Skatecaster 3, some with "SK-1 ST" in the model name (I've no idea the significance of that,) and so on. Some are hardtail as shown above, some have Floyd-Rose tremolo. Colors are red, ocean-like blue, gray and black. Some have transparent finishes, some flat, some gloss. It goes all over the place.

The Skatecaster is for all intents and purposes a Surfcaster body. The difference is that it's a solid-body, has no binding and no pick guard. But it is the same shape, more or less.

So to answer the question, yes, Charvel did truly stop making the Surfcaster. None of the Skatecasters are semi-hollow as far as I know. I've also not seen any with the cool Jackson "shark fin" inlay work on the fretboard either. And I certainly haven't seen any Skatecasters with single-coil pickups in them.

The closest you can get in a new guitar that resembles what the Surfcaster was is the current Ibanez Roadcore RC365H:

This is obviously not a copy of the Surfcaster, but, it has the right look and hardware where it counts. Pearloid pick guard, chrome-covered pickups, semi-hollow, nice burst finish. No vibrato system, but that's okay. This guitar is "Surfcaster-ish."

Now of course, hardcore Surfcaster fans will instantly say, "THAT'S NOT A CHARVEL!" Of course it's not. But it's one of the few guitars that's fairly close to what the Surfcaster was before being discontinued that you can buy new right now (at a nice price, I might add.) It even has a proper roundy fingerboard radius of roughly 9.45 inches, as Ibanez lists the radius as 240mm.

Should the original-design Surfcaster make a return?

I think so. The time is certainly right for it. Fender certainly scored a home run by reintroducing the big, swoopy shapes of the Jazzmaster and Jaguar (I even bought a Squier Jazzmaster because of it.)

If I had any say in how it should be done, I'd say offer two models. One by Charvel and one by Jackson.

The Charvel model would be USA-made, stay true to the original design and have a street price of $1,799. And believe me, there would be buyers lined up to get one at that price.

The Jackson model would be an Asian build at $399 street price. That puts it below the Ibanez Roadcore and be affordable to a lot of players looking for something cool and different. This is the guitar that should be in Guitar Center stores across America.

On the Charvel models in particular, this is a guitar style that can have total glitz and get away with it, such as having a "fireburst" boutique-style finish on it along with cream-color binding and other classy bits.

On the Jackson models, Fender can do what they do with Squier and offer some interesting alternatives. While the Charvel is 100% true to the original, the Jackson models are given latitude to try different things, such as a "blackout" version with black pearloid guard on it (which honestly would take to the Surfcaster shape quite nicely.)