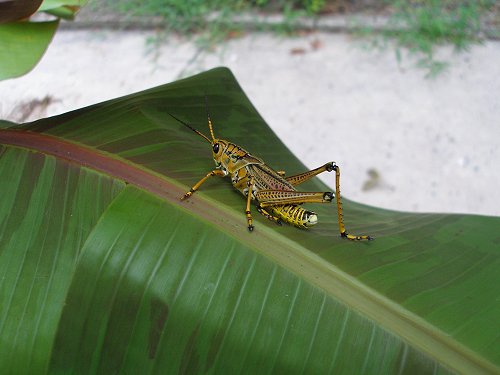 Found a photo I took of a Florida grasshopper in St. Petersburg. To my New Englander friends up north, your eyes do not deceive you - this sucker is big; it's over two inches long.

To those who get freaked out by bugs, this is a friendly bug. He moves really slowly and you can actually pet them (why you would I have no idea) if you wanted to. And it is cool to watch them walk because they do that slowly. They also don't do much besides just hang out most of the time, so it's not like one would get in your face or anything like that.

how many times a day do you ask yourself "why do i suck?"

Title of this entry comes from a hidden easter egg in this Homestar Runner cartoon. Well, it's not a cartoon.. more like a poster. I captured the audio, have a listen. Also check out the link, the rest of it is funny, too. TBC rules the internet once again. 🙂

I was thinking about heading to Inverness today but I'm not going because I'm just too tired. Driving tired is just bad news. While it's true that driving around most of FL is about ten times easier compared to New England, I don't get behind the wheel unless I'm fully alert. And contrary to popular belief, gulping a coffee or energy drink doesn't help. All that does is make you wired and tired. Sounds weird but it's true.

If all goes well I'll be going on a date this weekend with a cute girl. We'll be going to a movie but I have no idea which one. I checked online to see what's playing right now. The only ones I liked were Jackass: Number Two, HollywoodLand and Open Season. The rest sucked. I know a few friends who would really be into The Covenant but eh.. I'm not really into movies like that, and I'm also very sure it doesn't hold a candle to Stigmata - which kicked major ass.

Warning, this is a tech post. Ordinarily I try not to write about this too much here (mainly due to the reason no one gives a crap), but I put a lot of work into this so I'm a-gonna write about it.

My forum just underwent a massive overhaul and it took forever to get it done. To those wondering, no there wasn't anything lost, not to worry. And yes it still looks exactly the same as before.

The reason for this overhaul was for two reasons.

1. There was stuff behind the scenes that didn't work.
2. To further fight the good fight against spambots.

It's safe to say I have a heavily modified phpBB setup. Although it doesn't look like it, there's a whole lot of stuff in there I had to add on to make it work like the way I wanted to. But therein lies the problem that the more you add, the tougher it is to manage over time. I had so much beta crap in there it was ridiculous, which led to things that didn't work on the administrative end. But now it's all fixed. I put my forum on a diet, got rid of the crap and made everything work.

The spam thing.. sheezis.. where do I begin. I have had a long hard battle against spambots - and I'm winning, but the ultimate goal is to have zero spambots bust through and I believe I've finally gotten to that point.

You see, spambots (i.e. programs that purposely post comment spam, blog spam, forum spam and so on) aren't like the spam you get in your e-mail, which is simple enough to filter out. These guys are a lot tougher to combat. Some use CAPTCHA which doesn't really work that well (and annoys people). Others use outside comment systems like HaloScan; something I don't agree with because that means comments are hosted outside of your own web site. No thanks.

The trick is to have a system in place that the spambots cannot predict. The system I have in place will do just that. I have several things in place on registration of new accounts that will stop spambots cold. And it works. Very well.