one (almost) down, two to go

At this point in my life there are 3 major debts I have. One is a car payment and the other two I won't talk about because I don't want the ENTIRE INTERNET aware of my personal finances, thank you very much. 🙂

One of these debts (not the car payment) will soon be coming to a close in a few months.

This debt I speak of is something that's been a thorn in my side for over 6 years.

Yesterday I received a notice in the mail alerting me of the remaining balance and OH MY GOD it's actually close to being paid off.

obsession with the US roadway system? 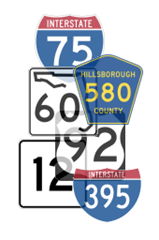 A week or so ago I was delivering my sister from TPA to Pop's house. At one point we were on Highway 41 and I said "We're goin' down Highway 41, just like it says in Ramblin' Man."

My sister replied with "How do you know all this stuff?"

I answered that I like to research stuff. This stuff includes things about roads in the US.

Here's a small example (with driving):

On a local level I will purposely take roads other people don't just to see where they go as long as it doesn't take me too far out of my way (because at that point you're wasting gas.) A good example is the way I drive to my boss' house as there are several ways to get there.

Then I discovered I could just take I-75 directly there. This cut the trip down to about 25 miles. Yeah, big difference.

I tried US-301 a few times. Distance-wise it's decent but any time saved is for nothing because of the wasted gas from stop-and-go traffic.

On a goof I found that Tamiami Trail is the best way to get there. If I remember correctly, the reason I ended up on Tamiami the first time was due to road construction where I was forced to take that road. I'm glad that happened because that road has the lightest traffic, allows you to breeze along at 55mph and (best part) cut my trip down to just under 21 miles. The only drawback is that it adds about 10 minutes to the trip. I encounter some stop-and-go traffic near Ybor City but it's all smooth sailing right after that point.

Due to my experimentation (and a little luck) I cut 14 miles out of the trip. In addition the route I take now is far less stressful, so it's a winning situation all around.

Am I obsessed with the US roadway system? Considering I save gas by examining where to go, I'd say no. 🙂

I purchased a used washer/dryer set. On a recommendation I went to Chester's Discount Appliances. This is a local place in Tampa Florida and is as old-school as you can get as far as a shop is concerned. There is no showroom and no people in company uniforms. None o' that. Just a big purple (yes purple) warehouse with rows and rows of used appliances.

I purchased a Whirlpool W/D set for $239. The price included tax, delivery and setup; it was delivered less than an hour after purchase.

After performing a test wash, the only thing wrong with the washer is that the final spin won't come on unless I click the button off then on again. Is this a big deal? Not really. I know how to get around it and am still able to get the laundry done. I'll call Chester's up on Tuesday to see if there's anything they can do about it. They guarantee all products sold for 30 days so hopefully this is something relatively easy to fix. And if not I'll just deal with it.

Having my own W/D set is a big deal for the following reasons: