On my lil' netbook I use the Opera browser the most because it runs the fastest. However the update to 10.52 was one of the rudest updates I've ever encountered. I start the browser, nothing happens, then a screen pops up stating it's updating the browser. Um.. okay? Then it plops an Opera icon on my desktop which I did NOT ask for, then it finally loaded.

The way Opera 10 updates itself sucks. I knew what was going on, but for other people they'd think their computer was getting hacked or something.

Once again I blanked my Facebook wall. It seems every other day I'm reading something about how Facebook simply doesn't care at all about privacy whatsoever, so much that I said screw that and just blanked it. My account is still active so people can send me messages and whatnot, but I won't be posting anything there for a while.

Oh, and I found another little gem of Facebook stupidity, Notes. If you feed in your blog from there, it downloads and copies any and all images, and stores it on their servers. There's no way to disable it from doing that. Lovely, eh?

On top of that, in typical Facebook fashion, there's no way to mass-delete Notes posts, so you have to delete one by one. What a pain in the ass that was. If that wasn't bad enough, it appears there is no setting whatsoever to tell Notes to STOP pulling in a feed from your blog.

And on top of THAT, Notes is integrated as a standard Facebook app, so you can't remove it.

florida is in the land of make believe

I discovered this song today, and yes I actually like it. Before I tell you why, here's the song and video:

Guys with tiger/leopard cut-off sleeve shirts, girls wearing next to nothing with big hair (awesome), lots of shiny bits that people wear and an extremely over-processed sound as far as the song goes, but that's fine because it fits.

The set is frappin' huge

Look at how many PEOPLE are there all dancing around. Look at the fact there's a POOL in the middle of the set which is deep enough to DIVE in (you see a dude actually do it late in the video). Heck, in some scenes you can see a BOAT in the water.

Right before the 3-minute mark you see this: 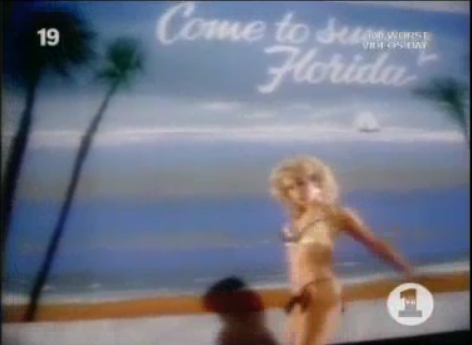 It's only there for a few seconds. It makes absolutely NO SENSE AT ALL as to why it's there in The Land of Make Believe. It's like the director said, "Okay, we need to have a shot of a hot girl in a bikini.. how can we fit this in?", someone replied with, "Hey! We have this BIG-ASS FLORIDA BACKDROP, let's use that!", and the director replied with, "Yep, that'll work!"

This is a UK group by the way, so it's very likely the video shoot was in the UK. That being the case, why was a big-ass Florida backdrop even there?

This is especially true if you drive a GM vehicle.