Sometimes I like playing the original Starcraft, but the problem is that the colors look like absolute crap on Windows 7 and there's basically nothing you can do to fix it.

However there's the super-awesome-cool thing called the Chaoslauncher. It allows Starcraft to be launch in windowed mode and has an "x2" option to double the size because the game only runs in 640x480. 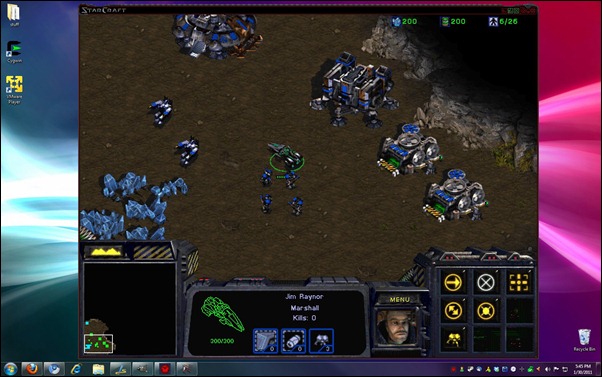 With Chaoslauncher, the game looks and runs perfectly in my Windows 7 64-bit. It even has a mouse 'locker' where so if you want to scroll the screens in Starcraft with your mouse (which you will do often), it works 100% and can be toggled on/off easily.

Digging through my old stuff I found some old video store rental cards from a business that closed well more than a decade ago called Video Galaxy. I always thought that was a very cool name for a video store.

I found that I had not one but three cards in my possession:

Okay, you wanna talk about old here, this is frickin' old for one very simple reason - all the area codes for the business numbers start with 203, and there hasn't been a 203 in Northeastern CT since 1994 because of the introduction of 860 in 1995.

Video Galaxy stores were very local. Danielson, Putnam and Brooklyn are all in the same small county of Windham. These stores operated at a time when VHS was still king of the hill in home movie rentals. And even though there were several VG stores, they all were decidedly Mom 'n' Pop style. Each ran things its own way and that was fine.

The bar code on the back of each card was a very new thing in the early 1990s, and video rental stores were the first businesses I actually saw using them regularly.

Working at a VG was basically for anybody. I saw both young and old folks working there and they genuinely liked they jobs - however they always bitched about how little they were paid (which is true, they were hardly paid anything).

What killed Video Galaxy as well as many other local video stores was a few things.

First there was cable television. When video rental stores opened up, few people had cable so it was routine that stores would have a fair amount of customers just about every night renting movies.

Second was Blockbuster. When they moved into town, people dumped the local stores almost overnight. Nobody could get new movies as fast as Blockbuster could.

Third was simply the fact that renting movies got old. The market peaked, video rental stores started losing money hand over fist and eventually were forced to shut down. Most of them never even got to the DVD stage. For their entire existence they did nothing but videocassette. First with Betamax and VHS, then just VHS until the bitter end.

When Video Galaxy closed shop, people were sad about it because it was a cool store.

last of the unearthed ancient emails from the early 2000s

This one has a bit of a story to it, so bear with me.

It is an inevitable truth with data archives that if you have an archive of data now but cannot access it because of a file formatting issue, you will be able to in the future. I have encountered this time and time again, and this time is no exception.

In my data archiving/disc destroying adventures, one disc originally written to in February 2001 had some stuff on it where I was able to save the whole disc.

I examine the ISO copy afterward and recognize the structure - they're Eudora Mail archives, however I didn't know which version of Eudora was used to save them originally.

Into VMware I go launching into a Windows 95 session.

I try pulling the data from Outlook Express 5 which does have a Eudora Mail importer. Somewhat worked, but the attachments wouldn't pull over. In addition it completely screwed up any HTML mail.

Tried importing the mail using Netscape Communicator which also has a Eudora Mail import. Worked much better but still didn't quite get it right (attachments missing, etc.)

At this point I thought, "Well, I guess I'll actually have to install Eudora to get these archives properly set up for export."

I head over to oldversion.com and download Eudora 5.1 and manually copy in the mail archives. Didn't work right for some reason. Then I wondered if the mail was originally placed using an older version, so I downloaded Eudora Light 3.0.6 and gave it a go.

I had to manually adjust a few paths so the file attachments for mails that had them showed up correctly, but yep, it worked.

Into Seamonkey 1.1.9 I go, imported the data, copied those MBOX databases over into my Thunderbird 3.1.7 profile folder and ta-da, a bunch of mail from late-2001/early-2002 I thought I lost was retrieved, all in original form, attachments and all.

Upon performing a duplicate mail search to see if I had imported these before, the result was zero dupes, so these were all mails I hadn't laid eyes on in almost 10 years.

The best mails in the archives were from a girl named Kim that I dated from East Providence, Rhode Island. Several of the mails were really long back at a time when people had long conversations in email. Messages included when we were together and post-breakup. And no there weren't any nastygrams sent or received from the post-breakup stuff.

This is the last of the ancient emails I had stored away on ancient CDs. I know from my collection there are no more because I've been through them all. The particular one that had the mails noted above escaped my attention because I wrote "BACKUP" on it and not "MAIL BACKUP" for whatever reason.

Why I was able to do this now but not before

There were three main reasons I was able to pull this off successfully.

It's like I said, if you wait long enough, the tools you need to pull your old data from previously inaccessible archives will become available and free to use. This is part of the reason I hung on to those old discs for so long. I knew one day I would be able to get the data back - and I did.