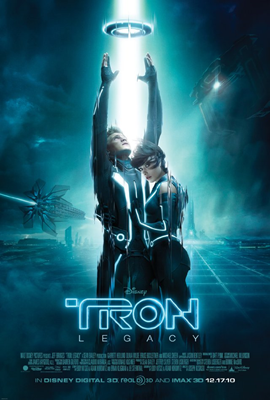 I finally got around to seeing TRON: Legacy. On a four-star rating I'd give it a 3. It's above-average and very well done, but is yet another one of those movies that focuses too much on effects and not enough on story just like The Incredible Hulk.

Did I like the movie? For the most part, yes.

The Flynn (as in old Flynn) character is weak. He seems to be an aloof goofball most of the time who doesn't really do much. He's a pivotal part of the story but his absent-minded nature does nothing to move the story along and in fact drags it down several times where you're just saying "DO SOMETHING! C'MON!" He eventually does get around to getting off his ass and making things happen, but it happens way too late for you to care.

In the parts I would have liked to hear more about the story, you see effects instead. Tons of them. Yes, they're spectacular and awesome, but they also get in the way of the story.

I thought the movie could have ended better. The way everything was left was on a somewhat somber note. I understand the writers were trying to put across the "new world" feeling where you're supposed to experience that through the character's eyes, but it just didn't work.

What confused me about TRON: Legacy

There were several parts of the movie that lost its glue so to speak when it came to the storyline.

Is the computer world big or not?

I honestly couldn't tell. I think, but am not sure, that the world of TL is supposed to be self-contained compared to the original TRON which could in fact branch out. My feeling is that the computer world in TL is small on purpose, although again, I'm just not sure.

Data can in effect age in real life due to bit rot, yet in TL there is nobody old, save for old Flynn. How could he age in the computer world while no other programs did? The excuse for this is "reinvention" on the program's part, but that just doesn't stick.

Where is the world?

In the original TRON, you knew exactly where the world was, as in the physical locations of the computer servers that housed it. In fact, you actually saw some of the servers in the beginning of TRON. In TL you have no idea at all other than the fact you assume it's all in the lab. However, the lab is really dark and you barely see anything while in there. Again, this does not stick well.

There are several other parts of the movie that don't stick, but can't mention them because it gives away too much of the storyline.

The programs acted like people with real character to them. This is good because the way we see data now compared to the 1980s is like night and day. For all intents and purposes, we do grant the technology we use life. For many people, if their computer, smartphone or otherwise starts working improperly, they start "reasoning" with the technology as if it were "sick" and needed to "get well".

Certain parts of the movie's look had a very, very intentional tech noir (a.k.a. Blade Runner-style) look to it, but did so in a way that was inspired and not totally ripped off. Worked great. Also, one of the characters was an odd-but-good combination of Roy Batty and Alex. You'll know which character I'm talking about if you see the film.

I liked that the computer world had a very dark look to it. There's a reason for that which is in the story, but I can't say why because it would ruin it if you haven't seen the flick yet. What I can comment about without ruining anything is the fact the sky has lightning in it almost all the time. This actually makes complete sense being everything in that world would be electric, and power would in fact arc lightning-style on a routine basis.

I like that the good guy and the bad guy were very clearly spelled out. There are some movies where you have no clue who the true villain is. You know who it is in TL, and I dig that because I can't stand movies where you don't know who's fighting who or for what reason.

I'd have to say no. TRON: Legacy had a real chance here to be very different compared to other modern sci-fi movies, but in the end ended up as something which will easily be forgotten in a year or two.

TL could have been more memorable if it had focused more on what a digital life is actually like. Movies are, after all, supposed to take us to a different place and immerse us in it. What makes the original TRON so good is that it shows a completely new world and you get to live inside that place for a short while. TL doesn't do that. You're not living in that world, you're just a visitor along for the ride.

At the end of the movie it's shown that even if you wanted to, you could not live in the digital world. The story ends in such a way where it's said loud and clear "you can't go here", figuratively slamming a door on your imagination. That above all else is why TL won't be memorable.

Truly great movies end on a note where you're left in wonder and awe. You say to yourself, "I felt like I was really there." As for TL? Too impersonal, forgettable and leaves you asking the wrong kind of questions.

Still a great movie to see in IMAX though.