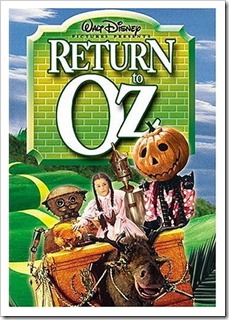 Return to Oz, released in 1985, is unofficially the sequel to the original 1939 The Wizard of Oz. This is yet again another one of those movies that I saw when I was barely a teenager, remembered almost nothing about it but wanted to see it again now as an adult with fresh eyes.

END_OF_DOCUMENT_TOKEN_TO_BE_REPLACED 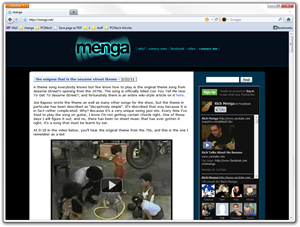 When it comes to my browsers I'm very particular about what I use and why, and sometimes it all comes down to a single function that's the ultimate decider on which I go with; I'll talk about that in a moment.

Chromium/Chrome for a while now has been giving me issues with certain things that just don't work correctly all the time. Some forms bug out, images sometimes won't load from time to time, etc. There wasn't any major problem with the browser; it was the little things that annoyed me. The annoyances mounted up to the point where I just ditched it completely.

After uninstalling I had decide whether to muddle along with IE or Firefox. I downloaded IE 9 RC. Hated it, and not available on the netbook since that runs XP. Opera is even worse concerning buggy problems than Chrome is, so I didn't bother with that mess.

I decided to go with Fx 3.6, but it's old clunky nature started annoying me. That and I knew that Xmarks BYOS wasn't available for it (allows you to use your own FTP for bookmark sync).

I installed Fx Beta 11, and three extensions that I use, LogMeIn, ScreenGrab and Xmarks BYOS didn't work. But then I found out that the latest Xmarks does allow you to use your own FTP server for sync (they had removed the feature but put it back in) and an alternative to ScreenGrab, Screenshot Pimp, captures 'complete page' easily. As for LogMeIn, there isn't an official plugin by that company yet that supports Fx 4, but that's okay because I can use IE 8 for that.

It was Xmarks' ability to use my own FTP serv that convinced me to make the switchover to Fx 4. That was an absolutely mandatory thing that had to work. It does, so I switched.

I have Fx 4 installed on both my desktop and netbook. On the netbook in particular it runs really nicely and much faster than Fx 3.6 did. Not as fast as Chrome, but I'll take the slightly slower operation knowing that all web sites I go to will, y'know, work like they're supposed to.

Fx is finally at a point where version 4 is stable, usable and works like it's supposed to. The last time I seriously tried it was beta 4 and it was frickin' awful. 7 betas later has shown huge improvements just about everywhere, so... yeah. Fx is now my primary browser. Again.

the enigma that is the sesame street theme

A theme song everybody knows but few know how to play is the original theme song from Sesame Street's opening from the 1970s. The song is officially titled Can You Tell Me How To Get To Sesame Street?, and fortunately there is an entire wiki-style article on it here.

Joe Raposo wrote the theme as well as many other songs for the show, but the theme in particular has been described as "deceptively simple". It's described that way because it is in fact rather complicated. Why? Because it's a very unique swing jazz mix. Every time I've tried to play the song on guitar, I know I'm not getting certain chords right. One of these days I will figure it out, and no, there has been no sheet music that has ever gotten it right; it's a song that must be learnt by ear.

At 0:18 in the video below, you'll hear the original theme from the 70s, and this is the one I remember as a kid:

Yes, you will hear a variation of the theme's swing jazz right after the main theme plays, further showing how complicated it really is.

What's crazier however is the music that happened after the show was over during the benefactor credits roll. It is 100% different, loud and bombastic. Big, booming bells and all.

Even weirder is how it abruptly ends and then the PBS tag comes in with an analog synth that is again NOTHING like what you just heard. The whole thing is just plain odd.

One day I'll learn the original Sesame Street theme, but as for the credits roll music.. um.. no. It's cool, but just weird. 🙂

Okay I just had to throw these in here. Below are the newer Sesame Street opener themes. If you liked the original, you really won't like these.

The above theme is from 1998-2001. I will give credit that they at least kept the same beat but unfortunately sounds so generic compared to the original.

Not memorable at all. The original beat is completely lost, and the focus is taken away from kids and placed almost exclusively on show characters instead. WRONG. So, so wrong. The show is about kids first, characters second, and that's not what the above theme does at all. It's just bad.

This above is from Sesame Street's official YouTube channel. They were cool enough to place the original Season 1 intro. Total coolness all around. Kicks ass now just like it did when it originally aired. Pity the sound quality wasn't a little better, but that's okay.