the (most expensive?) star trek game that barely sold 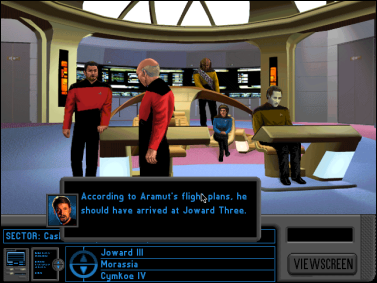 In my collection of now-vintage video games is Star Trek: A Final Unity. No, I did not buy it for full price and I'll explain that in a moment.

The year, 1995. Spectrum Holobyte releases ST:AFU which probably had the highest production cost for any video game of the time. The graphics were very intricate and represented the show characters for Star Trek: The Next Generation almost flawlessly. In addition, almost every show character voiced their own parts. Yes, this means Patrick Stewart voiced Captain Picard, Brent Spiner voiced Lt. Commander Data, Marina Sirtis voiced Counselor Deanna Troi and so on. I don't even want to begin to know what was spent to get all those actors from the show in the game, but they're there.

I distinctly remember the price of the game when released; there were two versions.

The first version was your standard box-and-CD, which in itself was pretty amazing for 1995 being not everyone had a CD-ROM drive yet. That cost $65.

The second collector's version - which came in series - was $105 to buy it. And no, I'm not kidding. I don't know how many of the series there were, but each came with special collector pieces, a pin if I remember correctly and a toy figurine.

It wasn't even a question of whether I'd buy either version or not - the answer was flat out no. Way too expensive.

Less than six months later I was in some major electronics store with my father going to buy something (I don't remember what). I saw this cheap white cardboard kiosk, as in the kind you see at Wal-Mart routinely, loaded with ST:AFU copies. All of them were nothing more than a cheap white black-and-white booklet and CD in shrink-wrap.

Yes, that means that those who released the game were so desperate to sell it had to make an ultra-basic version for sale just to break even - assuming that even happened. The game was exactly the same as it was in the $65 and $105 versions in a plain wrapper.

I recently dug out my copy of ST:AFU, which is playable and runs perfectly in DOSBox even on Windows 7 64-bit. Ah, the memories.

ST:AFU is a great game, no question. Well, except for the space battles - those suck. But the rest of the game is spot-on. It takes a long time to get through it and you can tell a ton of effort was put into development. The storyline is good, the game follows the show very well and most of all it's fun.

Here's the entire walkthrough of the game: