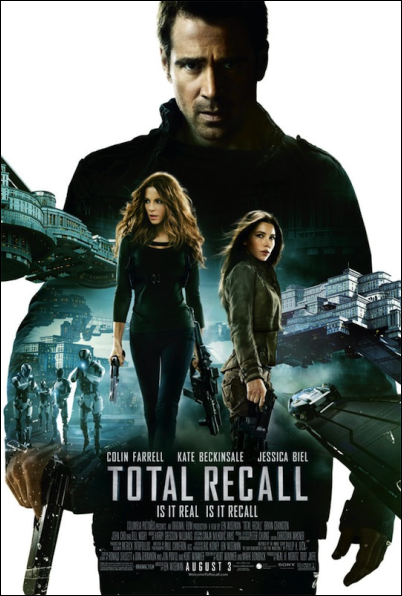 The 1990 film Total Recall is one seriously bad-ass awesome movie. It is an absolute classic Arnold Schwarzenegger movie and one of those flicks that you simply do not screw with. It does not nor did it ever need to be "improved" whatsoever.

Seriously, when you think of classic Schwarzenegger action movies, Total Recall is definitely in the top 5, right up there with Predator and Terminator 2: Judgment Day. It's that good.

Well, as of August 3 of this year, Total Recall is officially ruined because it's been remade. No, this is not a coninuation of the original story. It's the SAME story using the latest and greatest Hollywood computer animated shlock.

I watched the previews for this movie. Awful. Just plain awful. It's like watching someone playing a video game. This is basically no different than watching the 2008 version of The Incredible Hulk. Nothing but fluff, fluff and more fluff. When watching the preview stuff, I actually got ticked off. Not enraged or anything like that, but I was thinking, "Okay.. if there was one movie that I never thought would be messed with.. EVER.. it would be Total Recall."

Guess I was wrong there.

I'm not seeing this movie. No way.

How to record multitrack audio without a computer

The first question on your mind when it comes to recording with no computer is, "Why?"

END_OF_DOCUMENT_TOKEN_TO_BE_REPLACED

I've played enough electric guitars to know what's true and what isn't, and this is my top 5 list of electric guitar myths - as in things a lot of players believe to be true but aren't.