Confession: I'm not really a fan of analog reverb and never have been.

Analog reverb to me is just clunky, clanky garbage for the most part. Yeah, it's cool for vintage surf tones but not really much else as the video above I did explains.

This of course means I'm a big fan of digital reverb. I personally think nobody does a better job at digital reverb than Lexicon (it's emulated quite well in my GSP 1101). However if I had to have reverb in a pedal for whatever reason, I would get the BOSS RV-5 because it's one of the few reverb pedals in my experience that gets the job done right.

I am however very anti-reverb when it comes to live music, and if I had to have a "distant" sound on stage, I'd use delay. Namely, the DD-7. Looks like a complicated pedal but it's not and has a low learning curve.

Above is the newly-installed "E" truss rod cover that I received from China today. Total cost + shipping was $8.50. And yeah, I know that's a lot to spend for a little piece of plastic (even though it is cheaper than a Gibson cover), but I'm very happy with the result. 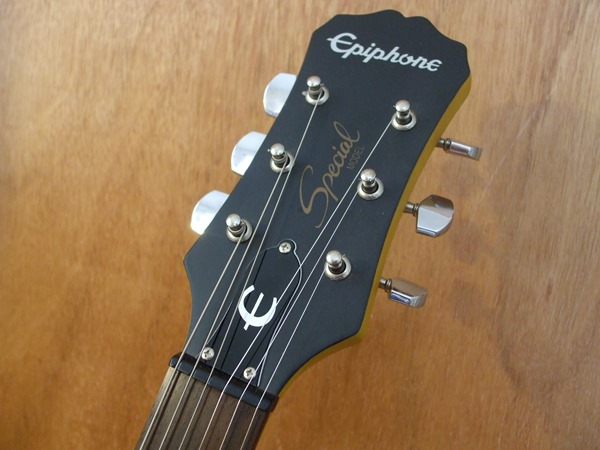 Before getting into the installation (which was ridiculously easy), this is the envelope it came in: 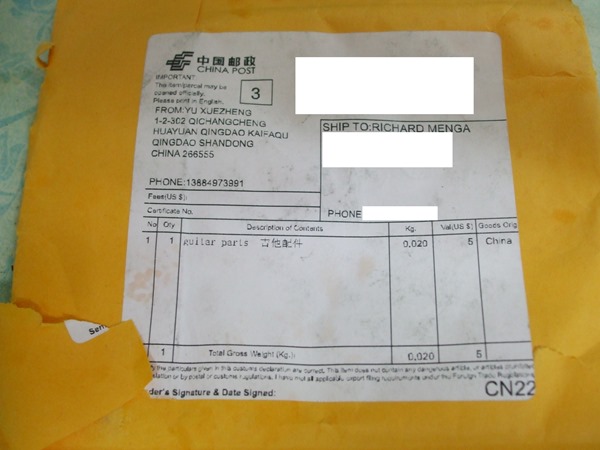 Just a plain bubble-padded (on the inside) envelope with nothing but a little plastic bag with the truss rod cover in it along with 3 screws, and one business card.

Installation was easy. First, I loosened the 5 string (as in the A string in standard tuning) so I could move it over as it was the only string blocking a screw, then it was three screws out, old cover out, new cover in, three screws in, tighten appropriately, put the 5 string back where it was, tune to pitch, done. It doesn't get much easier than that.

Was the cover an exact fit? Yes. My Epiphone Les Paul Special I P90 was made in China, as was the truss rod cover, so the screw holes lined up perfectly.

The only thing I didn't do was use the new screws. I purposely used the ones that came with the guitar originally because the threading on the new screws didn't look the same as the old, so I played a safe card there and just went with the old ones (which look fine anyway since the guitar isn't old).

The color of the E is actually not white but rather a very light silver. This is actually better than if it were stark white because it has a more regal appearance to it.

Does a cheap piece of plastic with a logo really make the guitar look that much better?

You know how much people like that Fender logo on the headstock for Fender guitars? Well, the same can be said for the Epiphone logo. While not as much of a storied brand as Fender is, that E is still a very distinctive thing.

Why E and not a Gibson cover?

Well, first of all, a Gibson cover won't fit on an Epiphone at all. But even if it did, my Les Paul is not a Gibson, and I don't want it to be a fake Gibson, because you get no respect playing a guitar pretending to be a brand it isn't.

The guitar, even though cheap, is a real-deal Epiphone, from the logo on the headstock to the stamped bolt plate where the neck meets the body.

Epiphone truss rod covers are almost exclusively used on Epiphone archtop guitars, and other than just one very cheap model, you never see them on Epi Les Paul guitars.

Do I feel the truss rod cover is worth what I paid for it? No (it's not worth more than 50 cents at best), but with it I now have some exclusivity and bragging rights with the guitar. That little cover distinctively says "I'm an Epiphone" even from a distance, which I don't consider to be a bad thing. The logo works very well with the shape of an Epi Les Paul headstock (which is distinctively different than a Gibson as it's much more "curvy").