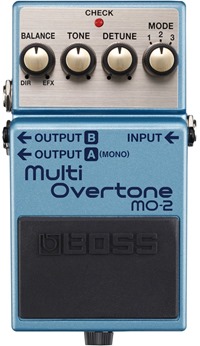 The pedal effect a.k.a. the stomp box is something that's been around a long time, taken many different forms and utilized many different technologies. One of the latest are the new offerings from BOSS such as the Multi Overtone (pictured). It has two outputs so you can create one seriously cool-sounding stereo effect. Cool pedal to have. If you're wondering what the Multi Overtone does, it's probably the best "enhanced chorus" you could ever have. You can detune just ever-so slightly, mix and match how much direct vs. how much effect is heard, and when using two amps... wow. It may not look like much, but it's an amazing effect. It would even work wonders just plugged into a mixer using two channels.

Anyway, aside from all that, there are certain things about pedal effects that most guitar players aren't aware of. These are the top 5.

Unless the pedal has an on/off switch, which most don't, when you plug a cable into the pedal, it's on.

"Doesn't the pedal switch count as the on/off?"

No. All that does is toggle whether the effect is on or not. If it were a true on/off switch, you would hear a soft "thump" every time you engaged the pedal. But you don't. When you stomp the switch, the effect instantly engages or disengages. Why? Because if a cable is plugged in, it's on.

Yes, this does mean if you want to save battery life, UNPLUG THE CABLES.

The supposed benefit of true bypass on a guitar effect pedal is the "cleanest" possible signal when the bypass is engaged.

But there's a downside and a rather large one. You might lose so much signal that you may barely get enough of it to your amplifier to be usable.

Think of it this way. Let's say you have a 20-foot guitar cable connected to 5 pedal effects on a pedal board all with true bypass, and each of those chained together by 1-foot cables. And at the end of the chain you have a 10-foot cable going to the amp. That is literally like having a guitar connected to a 35-foot cable (20 feet + 5 feet + 10 feet). When all the pedals are in true bypass, your guitar signal has to push through all that distance to get to the amp with no "help" whatsoever.

The "help" I'm referring to is what a pedal does when not in true bypass but not engaged. What happens is that when non-bypassed, more often than not the signal going in is THE SAME (or close to) the signal going OUT. The pedal is "helping along" the signal through it so that it can "reach" its destination, that being the end of the effect chain to the amp.

When true-bypassed, signal going out is WEAKER because its traveling through more distance before the end of the chain and then to the amp.

To put this in really simple terms, an effect pedal that is true-bypassed acts as nothing more than more distance for the signal to travel, the same as if you outright replaced the pedal with a 1-foot or 2-foot cable. And as you know (and if you don't, now you do), the more distance the signal has to travel, the weaker it gets before it gets to the amp.

In other words: Don't buy into the "true bypass" nonsense. As long as an effect pedal is properly constructed with good shielding and good wiring on the inside, your signal will be more than "clean" enough.

3. Batteries are always better than AC adapters when you want less noise

A 9-volt battery in a guitar effect pedal is a direct, "clean" power source.

An AC adapter connected to a pedal is an external power source that can very easily be "dirty" and cause signal interference.

If you're encountering the situation right now where you get buzzy and/or scratchy noises from your pedal effects, and you are certain the pedal is in good condition, switch to batteries.

Forced to use AC adapters?

Get a power strip that's up to the job: 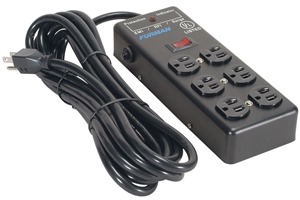 The above is a Furman SS-6B Steel Power Strip with 6 outlets and a proper 15-foot cord. It's not as expensive as you think it is. Notice how the outlets are wide apart, perfect for big AC adapters that most effect pedals use.

For small, sturdy and compact, you can't do any better.

4. Industrial grade 9-volt is the only battery worth using on an effect pedal

There's a bit of confusion concerning what "industrial grade" means, so I'll explain it.

Industrial grade DOES NOT mean "lasts longer". Not at all. It means "consistent drain rate".

A consistent drain rate means you can trust each battery to last a specific amount of time before dying on you.

With consumer-grade batteries, you never know what the drain rate will be. I guarantee you have bought batteries before in the store, and some will last for a good long time while others die on you the day you bought them. That's an inconsistent drain rate. You have no idea how long they will last.

When using industrial grade however, they are far more predictable as to when they will die on you. After using them for a while, you'll even be able to guess accurately exactly how much charge is left.

Bonus to buying industrial grade: It is ALWAYS cheaper

Whether you buy a box of 12 Energizer Industrial or a box of 12 Duracell Pro-Cell batteries, they will always be cheaper compared to any store you go to now.

You wouldn't think industrial-grade would be cheaper, but oh yeah, it is. Way, way cheaper. And a way, way better battery.

5. Socks save pedals from getting ruined

The floor is where most dust settles. And that dust is going to get into everything on the pedal.

To prevent dust and other gunk from getting in the pedal, put it in a sock. It really works. It fits nice and snug, doesn't cause static electricity and it's easy-in and easy-out.

If you're wondering which direction the pedal should go in the sock, it's always "knobs first".

Or, if you're in the situation where the pedal is in your room or rehearsal space and you just leave it on the floor unplugged (as you should) when not in use, cover it with a hand towel.

You'd be amazed at how many guitar players just leave their pedals in the open and get a nice layer of dust on them after only a few days. Don't be one of those guys. You spent the money on the pedals. Make them last.