More often than not it's true your very first electric guitar probably had a neck with 22 frets on it, which allows for three octaves of the key of D (low D, D and high D).

Personally, I prefer Fender vintage-style 21-fret necks. It took me a few years before I realized that's what I prefer, but I do.

My first 24-fret neck guitar was a cheesy copy of B.C. Rich Warlock made by a guitar company called Phantom. Unfortunately I don't have a photo of that guitar, but it was your standard Warlock shape that had the infamous neck dive when you wore it standing up. Back when I owned the Phantom (this was years ago) I didn't know anything about guitars, but even then I knew I didn't really care for 24-fret necks that much.

The current 24-fret guitar I own is a 2003 Schecter C-1 Classic, but I barely play it because I don't get nearly the enjoyment out of that guitar as I do out of my Squier guitars.

In the way I play guitar, I literally get confused if the neck has more than 21 frets. For example, whenever I play a modern American Strat with its standard 22-fret neck, that extra 22nd fret always messes with my head whenever I play up high on the fingerboard. For you fans of vintage Fender Strats out there, this is yet another reason why I say to try a "cheap" Squier, because most Squier electrics have 21-fret necks on them, and that's a HUGE part of what true Fender vintage feel is supposed to be like.

If you absolutely have to have an electric with a 24-fret neck on it, fortunately you don't have to spend a ton of money to get one. In fact, a guitar with a 24-fret neck these days is quite cheap. The Ibanez GRG120BDX is a good example, as that is a cheap guitar that's literally in Squier-price range. I have absolutely no idea how it plays or how it sounds, but like I said, cheap.

Do you really need that high E?

Do you solo all the time? Of course not. Most of the time you're playing chords, be they full-handed barre chords, power chords or whatever other chords you want to play.

The allure of having an electric guitar that can play 3 octaves of E is very tempting. I remember that when I had my first 24-fret guitar, I said to myself, "Cool! Now I can finally play those super-high notes!" But then I realized quickly there's really not much you can do on the high-fret range.

Have you ever noticed on older 24-fret guitars that the high frets are always tarnished? That's because they're almost never played. The guy who bought the 24-fret guitar originally probably thought he'd be using them all the time, only to find out he hardly ever used them, and that's why years later they're all mucked up.

As to answer the question of whether you actually need those 24 frets, no, you don't.

This is a phenomenon that happens regardless of how good or bad your eyesight is.

Okay, so you've got this 24-fret guitar with nice shiny frets. Above the 20th fret, all the frets are very close together. The fret spacing is too short to "play by feel" (meaning not enough tactile discrimination exists where you could "play blind"), so you're staring right at that board when playing those high notes.

When looking down at the frets, they're obviously all vertical lines, but above the 20th fret those lines are really close together. Stare at those lines long enough, and the frets appear to blur together.

Is there anything that can be done to combat this? Yes. You have to go by the fret markers on the top of the neck and not the ones on the fingerboard. At first, this will be a very weird way of playing because your eyes will focus on the top-dot markers while your fingers will be out-of-focus, but you'll get used to it.

If you want a 24-fret neck where you will never lose your place when playing, you want a neck with a maple fingerboard and black fret markers, like this: 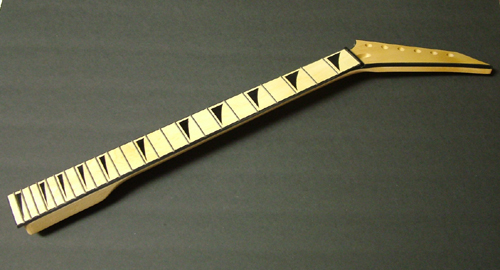 The black is almost the direct opposite color of the maple, and it's very easy for your eyes to know exactly where you are on the high frets at any given time.

White/mother-of-pearl/etc. fret markets on a rosewood or ebony fingerboard don't work for vision improvement purposes, because the white/mother-of-pearl is too close of a color to the metal frets as far as your eyes are concerned. In other words, everything will still blur together if you stare at it for too long, and you'll have to go by the dot markers on top of the neck.

In fact, for you players out there with poor eyesight that frequently encounter eye-blurring even on the lower frets, an easy solution is to switch to an electric guitar with a maple fingerboard with black fret markers.

There's this myth out there that one can solo better if he has more frets to play on. This is not true and never has been.

The best necks for soloing on are the kind that feel most comfortable to the fret hand, and that's obviously not the 24-fret neck. Your fret hand will "scrunch" when playing the upper notes on the 24-fret neck, it will not feel natural, and you may even enounter finger strain and wrist pain no matter what age you are.

If you're looking for faster soloing capability, you're probably looking for a short scale neck and not the extra frets. Read this other blog post where I explain everything about scale.

In other words, you'll probably find you can solo way faster on a Squier Jagmaster than you would on an Ibanez with a 24-fret neck. The Jagmaster only has 21 frets on it, but believe me, with its short scale neck you will race up and down it like nobody's business.

A 24-fret neck is more a novelty than anything else

Sure, a guitar with a 24-fret neck is nice to have. It looks cool and you have that third octave E for screeching-high solos.

24-fret necks aren't bad, and if you like them, that's fine and I don't have a problem with that. But at the end of the day, 21 and 22-fret necks feel better, it's much easier to know where you are on the board at any given time, and even if you're the super-soloist type, there's really not much in the way of songwriting that fits anywhere above the 20th fret.