after a month of owning a jazzmaster... 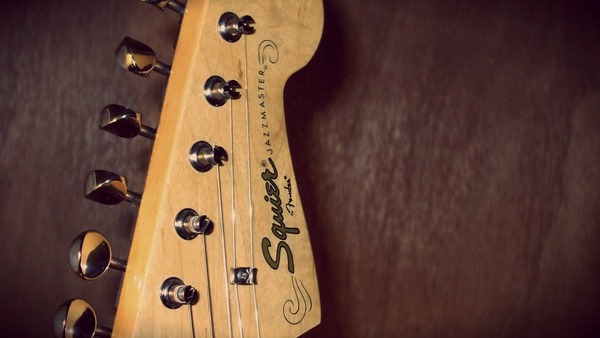 It's been a month (well, very close to a month) since getting the Jazzmaster, and some interesting things have happened, both good and bad.

I do truly love the way the Jazzmaster plays. Never in my life have I felt a guitar neck that felt so right, or so I thought. More on that in a moment.

I fell in love with the Jazz so much that I put my Bullet Strat in a gig bag and haven't touched it for probably a few weeks. It was just incredible to me how good the Jazz felt.

Today, after having the Strat in a bag for several weeks, I pulled it out to strum it a bit...

...and it felt awful. The guitar that's been my #1 go-to instrument since 2010 just felt completely wrong.

That's when I realized it really wasn't the Jazz neck I fell in love with particularly, but the position of the neck.

As you may or may not know, Jazzmasters and Jaguars have what is called an offset-waist body. What this does is stick the neck out more. The Jazz is the same 25.5-inch scale as a Strat or Tele, has the same frets and the same fingerboard radius, with the difference that it's positioned out further by about 2 or 3 inches. And oh, what a difference this makes.

I can do things on that neck I could never do (or at least not do easily) on a Strat. That offset position just feels 100% correct.

So what's the bad part? The Strat now feels foreign to me. I sit down with the Strat and everything about it feels wrong. I don't like the position of the neck and how my hand has to scrunch up to play certain things. I dearly miss the "slow"-style vibrato system that the Jazz has and the Strat doesn't. I don't like how the Strat just feels much more difficult to play.

Basically put, I'm an offset convert. It may have been that all this time what I really needed was a guitar with a neck in a different position. And I got it with the Jazz.

This is not one of those things where you put a Strat down, pick up an acoustic for a while, play that and then switch back to a Strat later. Nope. This is totally different. The offset shape and different position of the neck on the Jazz was a total game-changer for me.

I honestly don't know if I'll ever be able to pick up a Stratocaster or Telecaster again and not feel annoyed to play it now. It doesn't matter if it's my Squier Bullet Strat or an expensive American Standard because that neck position will always be the same, and there's not a thing I can do about it.

For those that take what I say seriously, no, I am not telling you to dump your Strats and Teles for Jazzes and Jags. Not at all. If you like what you have, keep on playing what you always have been and don't do that "If Rich does it, I'll do it" thing.

I just found that the guitar for me is the Jazz, or to be more specific, offset-waist body guitars. The neck position they have is just perfect for my playing style, and is the only position that has ever in all my years of playing guitar felt right.