adventures in getting used to reading an analog clock 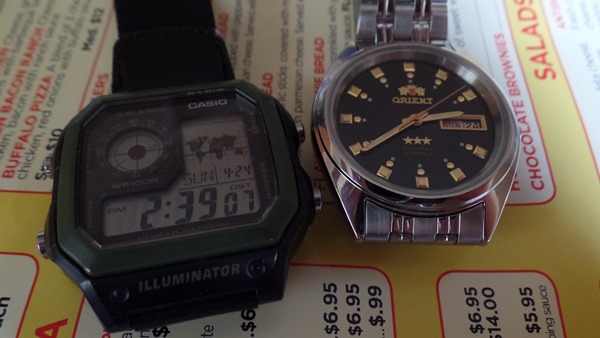 When you're used to reading a digital watch, switching to analog is literally learning to read time all over again.

Why write a whole article about this?

Answer: There are tons of unbelievably cool looking clocks FOR CHEAP (all types, be it for wall, desk, nightstand use or whatever.) Limiting yourself to just digital clocks means you're missing out on a whole ton of cool wristwatches and other clocks.

Believe me, after you see what you can get from the above link, you'll want to start getting more analog clocks.

...is that I was totally used to a digital display and not analog when it came to telling time. This was a bit of problem when I started wearing an analog wristwatch.

The solution? Relearn the language of how time is told when using analog, which is purposely inexact.

The language of reading time on an analog clock

People get really confused by this, but I can assure you it's not confusing.

The top of the hour on the dial is minute position 12. 1:00pm would be stated as just "one" and nothing more unless you wanted to indicate daylight or lack thereof, i.e. "one in the morning" or "one in the afternoon."

The first large range of time on the dial is 1 to 5 where the word after or past is used.

The second large range of time on the dial is 7 to 11 where the word of, to, until or the shortened 'til is used, and this is the part that confuses people most.

This is where the inexact part comes in.

Rounding the minute to the nearest major index makes it easier to tell the time faster, even though it technically results in the time stated being slightly wrong.

Generally speaking, the rounding range is two minutes before or after a major index.

Here are two examples of that:

WHY bother reading the time this way at all?

There are three reasons. 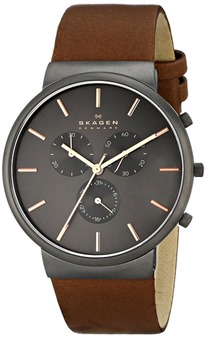 The above watch, much like my Orient Three Star pictured at top, only has minute indices placed at five-minute intervals. Between those indices? Nothing. What this means is that just from looking at the dial, you basically never have absolutely exact to-the-minute time anywhere outside of those five-minute intervals...

...which is not a problem if you state the time inexactly as noted above.

You will notice that several Skagen brand models are similar to the style shown above, and that doesn't make them "bad" watches. It just means you have to know how to read an analog dial.

Reason #2: Exactness is not required

When I think of people that have a real need for exact times from a watch, I think of those who work in medical, scientific or engineering fields of work.

And I suppose you could also argue that runners, gym rats and college students (as in the kind who time exams) require exactness from their timepieces also.

But for everyone else? It's not necessary to have a watch that's absolutely exact. In fact, it's usually true the only thing that really matters is having a clock to check to make sure you're not too late nor too early for something.

This brings me to the third reason...

Reason #3: A less stressful, "most human" way of reading/telling time

The closest you can possibly get to having nearly-perfect timekeeping is with an atomic digital watch such as any Casio "waveceptor" model.

However, when it comes to reading the time, I'm finding analog is better. It's a "lazier," less stressful, more human way of checking the time.

When I first received my Orient Three Star, I saw there were no minor minute indices on the dial and thought, "Uh-oh. Will I be able to tell time on this thing?" Answer: Yes, of course I can, and easily.

True, I had to learn again how to read time, but it wasn't difficult. And now I prefer it.

Digital is cool and all that, but analog time telling is just easier on the soul, if that makes any sense. I'll be keeping my digital timepieces because I still do use them periodically, but for my daily wearer, it's all analog all the way.