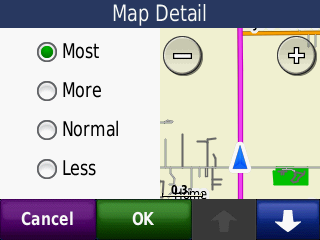 Some GPS crapola and the latest on my weight loss.

I'll start with the satnav first.

So my nuvi 200 arrived. I updated the firmware, updated with the free OSM maps and yep, works like a charm. No issues. Well, there was one. The battery was stone dead when I got it, and you can't perform a firmware update on a nuvi with a dead battery. After charging it up for a couple of hours I was able to get that firmware update in there. Even if the battery barely holds a charge for more than 30 minutes, that doesn't matter since I always use one plugged in anyway. Technically, all that's needed is a battery that can power the unit for just 3 minutes to get updated firmware in it, and fortunately the battery still powers the unit well beyond just 3 minutes. 🙂 I'm guessing it can still power the unit for about an hour on a full charge. For a satnav made in 2007 or 2008, that's pretty good.

I did a road test with the 200 and it worked out fine. No weird issues that I could see.

In the end, yes this was a good buy. Bear in mind I bought this for use as a backup, and I had to do extra stuff (as in GPS-nerdy stuff) to get it working right. For other people I'd suggest getting any Garmin model ending in "LM" for Lifetime Maps as it is easier to deal with. For example, most of you out there would probably be a lot happier with the nuvi 55LM. It costs slightly more, but you get the big 5-inch screen (compared to the 200's 3.5-inch screen,) and the Lifetime Maps option is there along with other goodies.

Half-a-pound away from being un-fat

I'm now weighing in at 169.8 pounds. To officially have a BMI of 25 for my height, I need to be 169.3 pounds. That means I'm literally half-a-pound away from being in the normal weight range.

It has been amazing how much weight I've lost in such a short period of time. No, I didn't starve myself. And there were no diet pills, no drugs involved and no diet plan. Just a switch over to a plant-based diet, doing some light exercise and staying away from all the junk.

I have been overweight for pretty much all of my adult life. Not grossly overweight, and certainly not what most would see as obese by any means. But overweight nonetheless. And to be not fat (or rather almost-not-fat as I still have half-a-pound to go) is a good feeling, but at the same time a bit weird since I've been overweight for so long.

To put this in perspective, to be a man who is not overweight is a rarity in the United States. Americans are fat and everyone knows this. America is a big, fat country and we have awful eating habits.

I'm 40. And to be a 40-year-old man who isn't fat in America? That's nothing short of a miracle these days.

The US Census designates my age group range as 35 to 44. And I don't see too many people around here in the 35-44 age range having a normal weight anymore. Since I started dropping the pounds, I've been doing people-watching when out and about. And oh yes, my age group is not only fat but disgustingly fat. I live in Tampa Bay Florida. And while Florida is a southern state, it is not the fattest state in the union. Far from it. Even so, the 35-44 age group is all sorts of fattened up.

Sometimes I look at people when I'm out doing stuff and think, "Is there anyone in my age group that didn't turn into a fatty? Seriously?"

Here are a few interesting things that have happened concerning my lifestyle switch and weight loss:

At the grocery store, my basket gets filled with fruits, vegetables, a bag of rice and maybe some bottled water if I need it.

When I put this stuff on the conveyor belt at the checkout, I do sometimes get angry stares by fat people in line behind me. They see me, see the food I'm buying, compare that to their 12-pack of Coke, potato chips and frozen pizzas they put on the belt behind me and get ticked off.

2. I get treated more nicely by younger people

As rude as this sounds, this is the truth: If you're over 30 (never mind 40) and fat, young people (as in 21 to 29) don't like you. They just don't. They see the fatness, make an instant judgment call and don't want to be anywhere near you.

As I've continued to lose weight, whenever I go into a business where younger people are working, they are much more willing to talk to me. For example, if I'm in a hardware store and ask a younger employee for help to find something, they used to just point to the aisle where the thing was, say to go there and blow me off. Now they will actually walk over to the aisle with me and find the item. I'm the same guy I was before, just thinner. My lack of fatness has made me more approachable.

3. I get treated more rudely by fat people my age

Fat people in my age group don't like people in the same age group who aren't fat. Why? Envy. I'm not a fatty, so that basically means just by being in their presence, I remind them of how fat they are. Even if I'm the nicest guy in the world and never said one word about their weight, it doesn't matter. I'm not fat and they are; that's all they see and their attitude reflects that.

4. Fat puts years on you; losing weight takes years off you

I am looking younger these days, so much to the point where it actually scared me.

What's the scary part? Seeing myself in the mirror, looking at who is staring back at me, thinking I stepped back in time 20 years and almost not recognizing myself. After a moment, I adjust and realize that yeah, it's me. But for that initial glance, sometimes it's a bit unnerving.

When you've been overweight for your entire adult life, and then you drop weight to the point where you weighed what you did 20+ years ago, that takes getting used to. I am getting used to it, but it's a bit of a slow process.

So anyway, the weight loss continues. My ultimate goal is to get down to 160 or maybe even 155. I'm eating regularly and the pounds are coming off, but there will come a point where I'll level out. I don't know where it will happen. Could be 160. Could be 155. Could even be 150. I'm not sure just yet.