back to the future - five months later 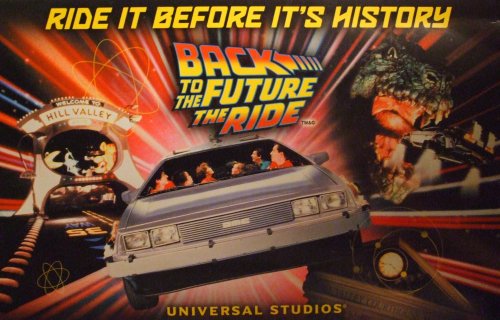 Above: A mailer that was sent by Universal Studios to year-round ticket holders informing that the Back to the Future ride was closing.

Today is five months to the day (more or less) since I recorded my video on YouTube about the ride's closure. I had written about this before when it had only 16,000 views. Now it's up to over 57,000.

Back to the Future is making news once again. Why? There are two Universal Studios theme parks in the USA. One is near me in Florida, the other in California. In early September, the other BTTF ride will be closing down over there, leaving the only remaining one to be at Universal Studios Japan.

It is nothing short of amazing the outpouring of emotion this movie still generates. While I'm quick to gripe about YouTube comments, I don't when it comes to the BTTF video I posted because it's been overwhelmingly positive.

However there have been more than a few that have been outright angered at the ride's closing. Reason? They couldn't get there in time to experience it for themselves. If I were to blame Universal Studios for anything, it would be that they should have launched a short national television ad campaign to alert the masses the ride was closing. I'm more than certain the ad campaign would have paid for itself in ticket sales and turned a good profit besides that.

I also realized something. My video is probably one of the first (if not the first) that alerted the masses a popular ride was closing down before it actually happened.

There's something else I also wonder: Why is it that theme parks (even ones besides Universal) haven't made "multi" simulator rides? Logistically speaking, this would not be difficult to do with "lo-fi" simulators. For example, you could set the system so that every two hours a different simulator would be running. Sometimes it would be E.T., other times Back to the Future and so on. Granted, it wouldn't have the personalization of its predecessors, but it would save a ton of space and be more attractive for the fact you have choice.

Hey, it could work.

Theme parks have limited space, so might as well make the best of it. I'm sure I'm not the first guy to think of this idea.

Note to Universal: I'd be happy to test it should you develop such a system. 🙂