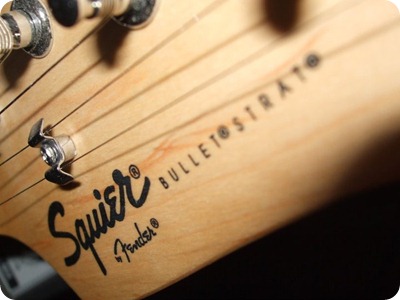 On February 1, 2011 I bought a new Arctic White Squier Bullet Strat - the second Squier I've ever owned. After a month of owning it, the lower 12th fret dot inlay sunk into the neck. That was fixed under warranty repair. Since then the only real issue has been the pickup selector is a bit scratchy going from selection to selection, and that's because it's a cheap guitar. I can either have this fixed under warranty, or I can attempt a new switch install myself. I may opt to do it myself because I really want to learn how to do this stuff, and in reality it's not hard to do. The wiring diagram for my Bullet Strat is very simple in design and almost impossible to screw up. The hard part is using a soldering iron, as I have almost no experience with one, but it's not like it takes days to learn how to solder. More like minutes. I'd just buy a spool of cheap wire and do a few test solders to make sure I get it right, then go for it from there with the real thing. The switch itself incidentally is 12 bucks. Cheap upgrade and a good one at that.

If I have good luck with the switch replacement, I might actually buy another and replace the one on my red Squier, because that one is in really bad shape - but there's a problem as there is no wiring diagram available for my '89. However my red Squier does have the same pickup settings as Banana does, which is this: 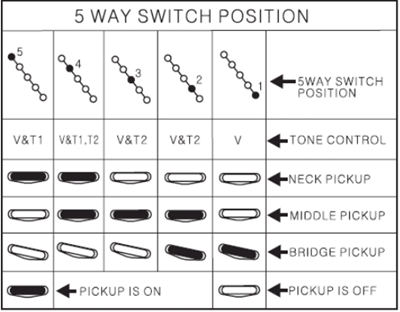 Unless a Deluxe model, all Squier Strats are set up in such a way where first position is volume-only, with tone control only available to positions 2, 3, 4 and 5. My '89 is like this as is Banana. Given that '89 and Banana are identical in this respect, the 5-way switch should be wired the exact same way on both; there's no reason it shouldn't be as the configurations are the same. But I'll cross that bridge when I come to it. If when I get into the '89 and the selector connections are all different, I'll have to make do and just do my best to repair it instead of replace.

Anyway, Banana at this point is what I consider to be broken in. I'm at the point where I prefer playing her over any other guitar I own. She sings the way I want her to now and I'm used to her quirky dynamics. She will be the primary guitar I used on my upcoming release - no doubt about that. Yes I will be using the '89 and my '93 USA-made blue Strat as well (just because), but the bulk of the guitar work will be done on Banana.

I don't know if I'll be doing my hardware crapola with Banana before or after recording. Technically I don't need to at this point, so I'll probably just record first, upgrade hardware later.