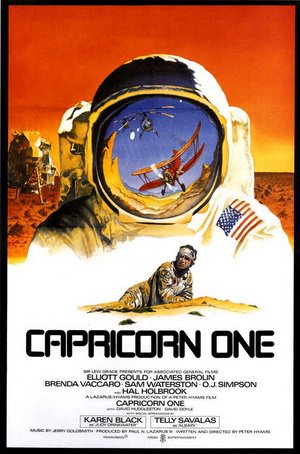 If you like conspiracy theory inspired movies, then this film is definitely one you should watch.

Capricorn One is a movie released in June 1978 that surprisingly holds up pretty well even now. Yeah, there are a few parts where you can totally see 1970s style, but fortunately the story is good enough where that doesn't bother you too much.

This movie is directly inspired from people who firmly believe the Apollo moon landings between 1969 and 1972 never happened. As said above, this flick was released in 1978, just a scant 6 years after the last moon mission (Apollo 17) in '72, so the idea of, "Were the moon landings fake?" was still a very fresh idea in the minds of many.

In Capricorn One, they're not going to the moon but rather to Mars, and the whole story of the film is about how the government faked the whole thing, and the astronaut's attempt to escape and not be killed by government agents. In an interview, the director openly admitted some of the lines were directly lifted from what the real astronauts actually said on their moon missions, and then changed them slightly to fit his movie. In effect, he was saying in so many words that the movie almost wrote itself.

But is it a good movie? For entertainment value, yeah it's great. But from a critical point of view, there are a lot of flaws.

And don't worry, what I'll say here doesn't give away the story.

Sort-of plot hole: The astronaunts didn't understand sooner that no matter what, the governement was going to eliminate them because they would have been too dangerous to keep alive. I call this a "sort-of" plot hole because it could have been they were just playing along until they figured out the best course of action to take, but then later on, one says "We're dead!" even though that was very obvious much earlier.

Plot hole: When Caulfield gets shot at, we never know who the gunman is, why he's there, why he only took one shot, purposely missed and didn't kill him, and then stole his car... big hole there.

Plot hole: You never have a good idea of how fast or slow time is passing in the desert scenes, nor do truly have any idea how far the men have traveled across it.

Weirdness: The Hollis Peaker character, while funny.. what's he doing there? What's his purpose?

Weirdness: What the hell is the relationship between Caulfield and Judy supposed to be? I think the only reason for Judy's character was just so that Karen Black could be written in the movie, because she is listed in the credits as a "special appearance". Didn't do anything for the movie. She was annoying.

Weirdness: Whom is the main character? That's never really answered. It leans towards Caulfield a lot, however we don't meet him until almost 25 MINUTES into the movie.

Unrealistic: The air battle scene (which is all I can say about it without giving anything away) is just... there's no way that could happen in real life. But it's VERY entertaining. 🙂

Okay, that's the bad stuff. There's more but that would take forever to write out.

The good stuff is that from a conspiracy theorist's point of view, it's a good watch. From an entertainment perspective, it's also a good watch. There are several scenes where things get really tense and keeps things going along (even though the pacing is frickin' awful). Even with all the holes, it's still enjoyable.

My biggest complaint.. is the ending. I won't say what it is, but I will say that you totally want the story to continue. You want to see something happen after that. But you don't and never will. The way the movie ends leaves you dangling. I would have even accepted a few on-screen paragrahs after the fade the black, like "So-and-so arrived at so-and-so, stuff happened and the world was never the same... One year later, [this guy] was fired, [that guy] answered for his crimes..." etc., etc. You get the idea. How I wish that was put in there, but it didn't happen.

Here's are my the guesses as to why the movie ended like it did.

A) The director wanted to end the movie leaving the audience to speculate what happened afterward (which didn't work at all).

B) The production cost was way too high at that point and there wasn't enough money to complete the film properly.

C) The director simply didn't know how to end the movie.

I'm going with a combo of B and C.

Aside from the sloppy writing and bad ending, it's still good.

The most entertaining scene? The air battle, no question. And Telly Savalas is a RIOT during those scenes too. Laugh-out-loud funny stuff there mixed in with good action. Totally unrealistic action, but who cares? It's still great.

I liked the movie and it's a fun trip into escapism for a while, which after all are what movies are all about.