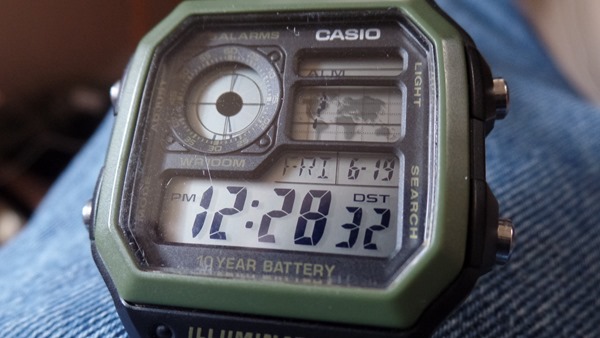 I just bought another one of these, and there were a few reasons for it.

...and that is the first reason I bought a second one. Finding one for $16.20 brand new is unheard of, especially considering this particular Casio watch is loaded with features.

The original I have pictured above shows the watch as a bit dinged up now, but that's what happens when you wear a watch daily.  When my new one arrives, all I'm going to do is set the time on it and then keep it in the box until I need it. I figure it will be a few years before my existing AE1200 will get so dinged up that it will be basically unreadable. When that happens, I'll use the spare.

There's plenty of info out on the internet explaining the technical specifics of this watch, but this is the stuff that matters to me.

Another tale of fat-to-fit concerning this watch

After I bought the first one in 2013, I wore it for a few months and then stopped because the strap started squeaking. But then after I lost over 40 pounds, I tried wearing it again, and no squeak. Since I lost a lot of weight, my wrist became slightly slimmer just enough so the strap could fit normally without making any weird noises when moving around normally.

When you find a cheap watch you like, buy two or three of them

Some cheap digital watches are really nice, and the AE1200WHB-1BV is one of those. More specifically, it's one of those for me. And I seriously might buy a third one later on.

This Casio is not for everyone. My photo of it makes it look huge, but it's not. The photo makes it look like a 48 or a 50mm case diameter, but it's actually a 40mm. This isn't nearly as small as, say, an F91W-1 model which has a seriously small 33mm diameter, but at the same time it's nowhere near as large as a G-Shock DW-9052V-1CR with its 48mm diameter (and also has a nylon strap, by the way.)

I'm a happy camper with my Casio

A plain, digital wristwatch is low tech, but good tech. It works phenomenally well and does exactly the job it's supposed to do.

The best tech is the kind you can trust and not have to think about at all. I just put the watch on my wrist and I simply don't have to worry about it.